T stirmi really jacked me up

During the course of routine cage maintenance, some total idiot in the unit above mine must've dropped something weighing several hundred pounds.

I really felt that BOOM.

Mindy got spooked and ran out of the enclosure right off the edge of the shelf and fell halfway to the ground.

I caught her in mid air and got her back into the cage, didn't realize that I took a hit until I was putting the lid back on the cage, had to finish with the left hand.

Anyway, I had my phone ready camera app open in case she came out and presented herself.

It didn't start to hurt real bad until I tried squeezing the venom out & then I started bleeding like a stuck pig.

The whole thing happened pretty fast, split second. I'm typing this left handed and had to call off of work.

I'm not sure what I'm gonna tell them. It's like when those big wall wasps get you but with more mechanical damage.

It took a while to get the blood off because it basically didn't clot for quite a while. These pics were taken before the venom fully kicked in.

I should've worn those stab proof gloves that I sometimes use with my pokies. This cage is pretty unwieldy and I usually don't put it in the tub unless I'm pulling her out of the cage completely.

At least the tarantula is ok. I don't think she's in premolt so any internal damage should mend up if it occurred. I'm going to feed her in a few days so she can settle in the cage again.

This happened around 3pm EST. Now it's a few hours later. I'm going to try to get some sleep. 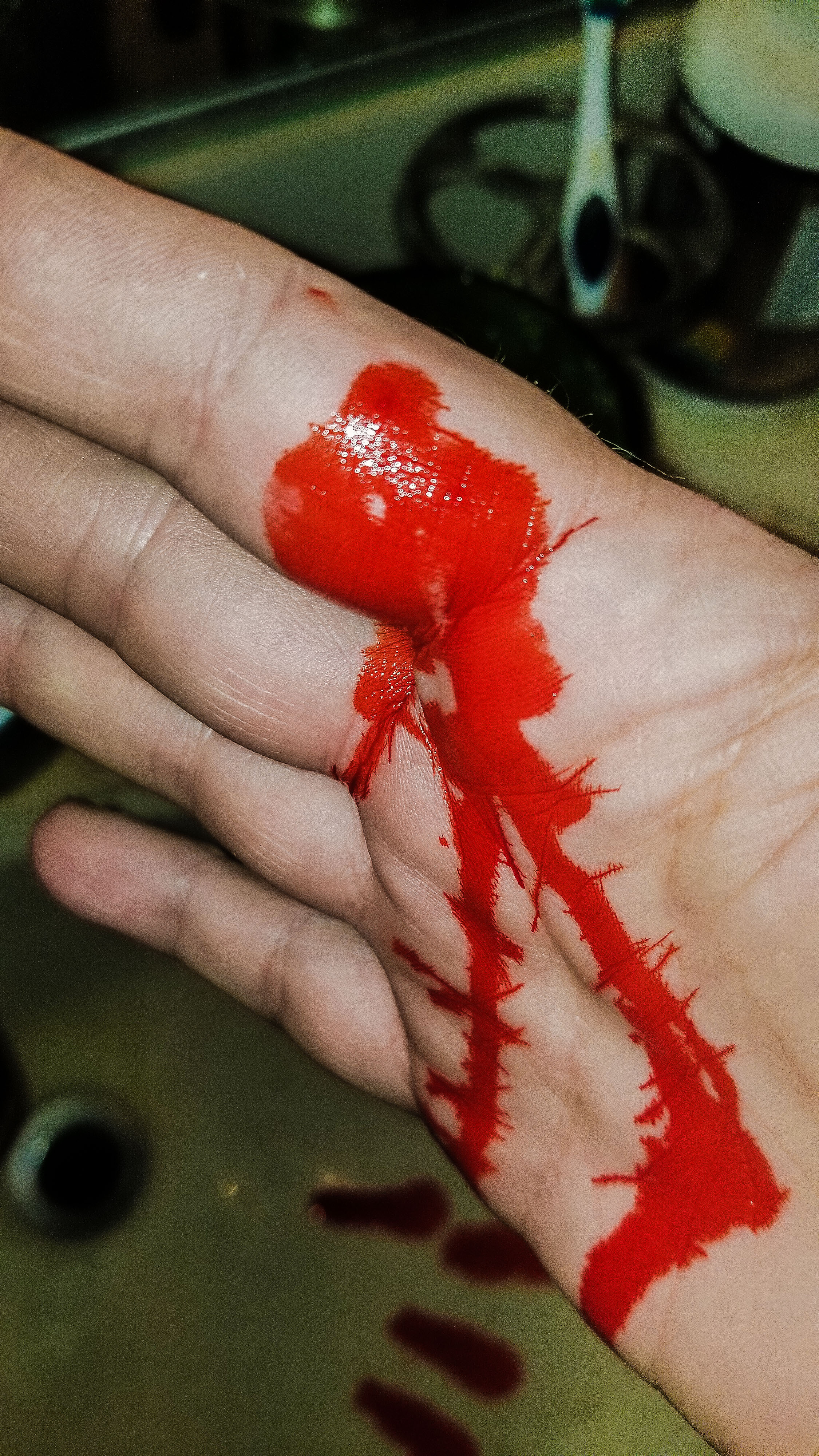 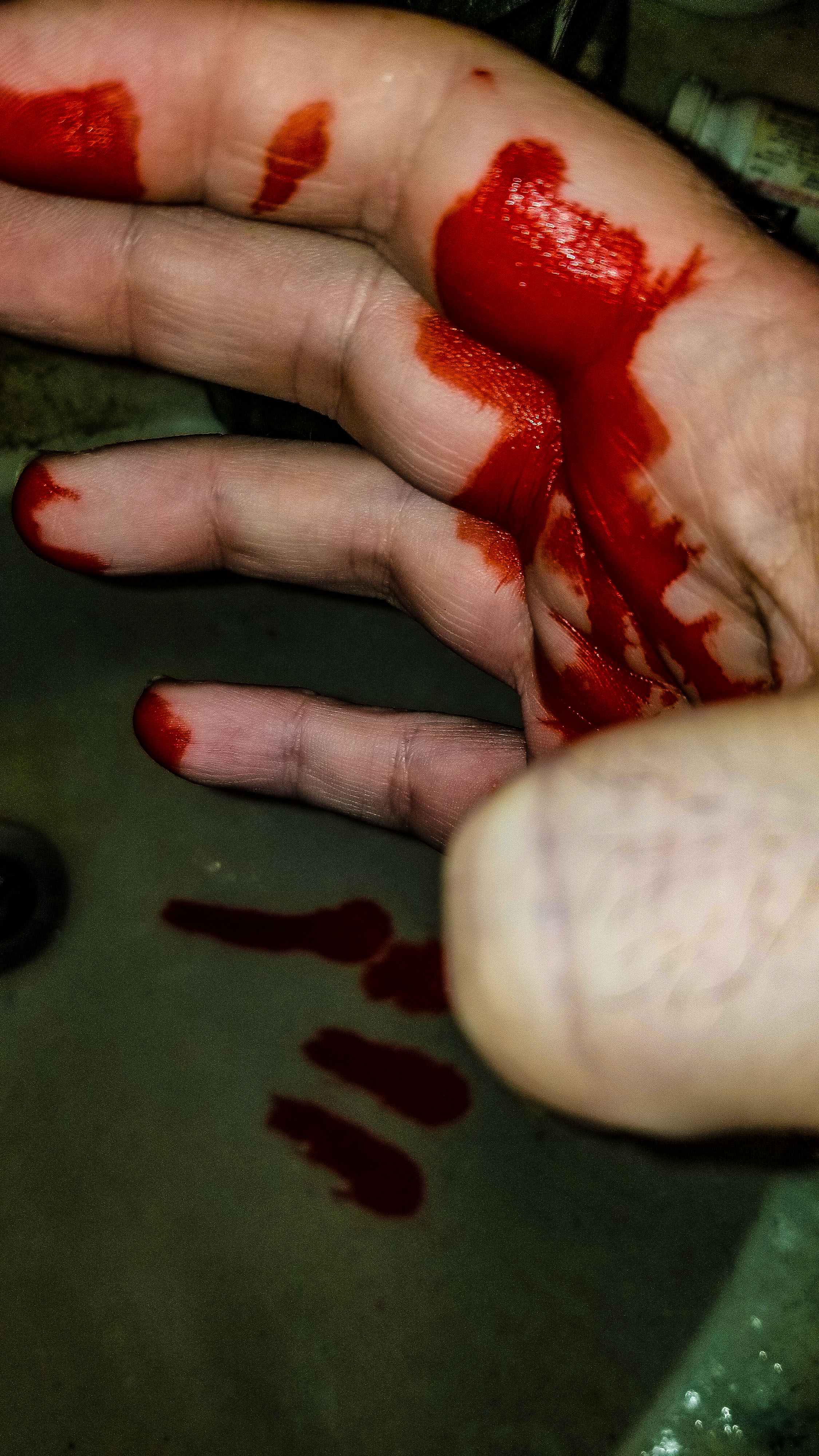 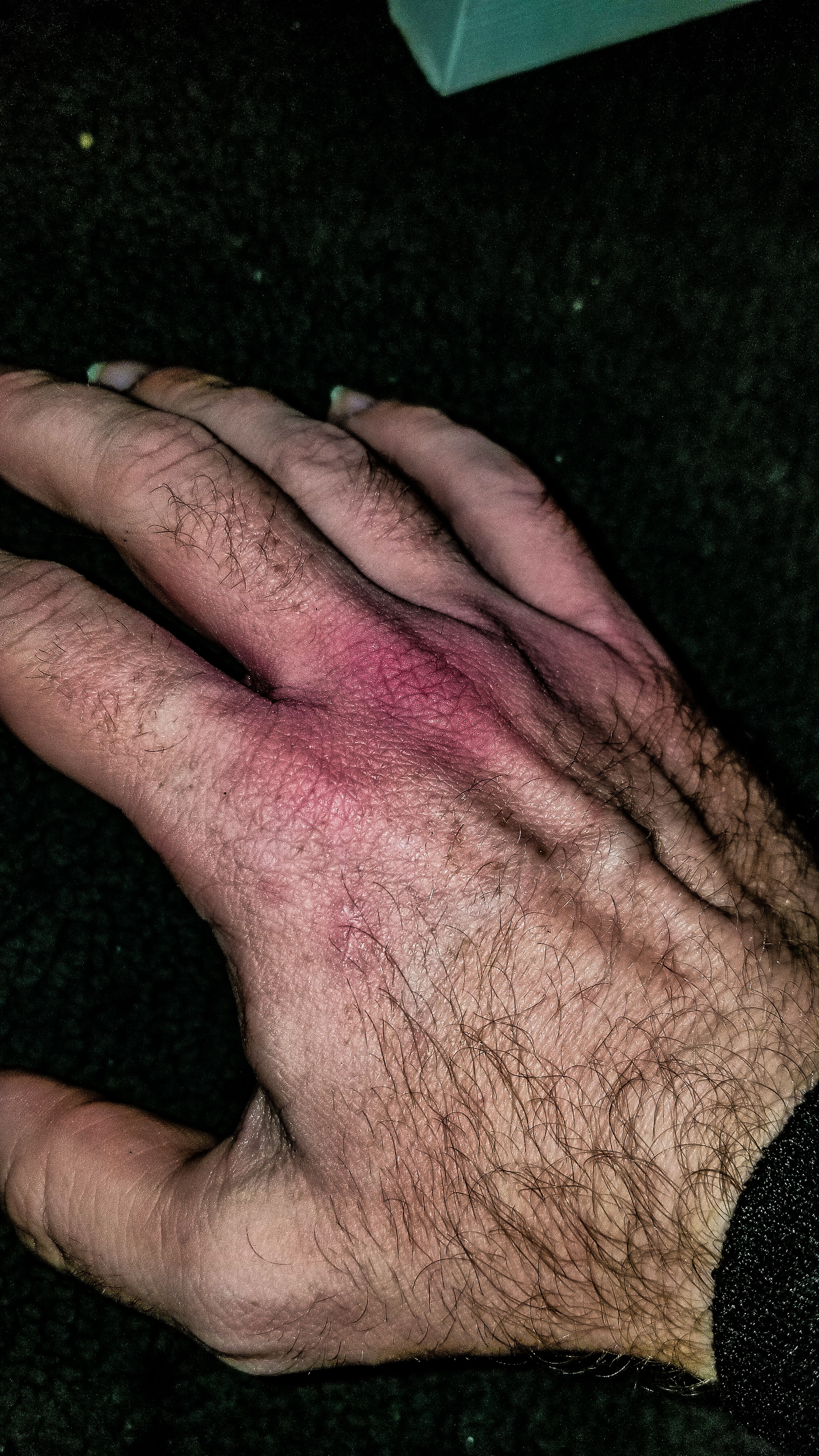 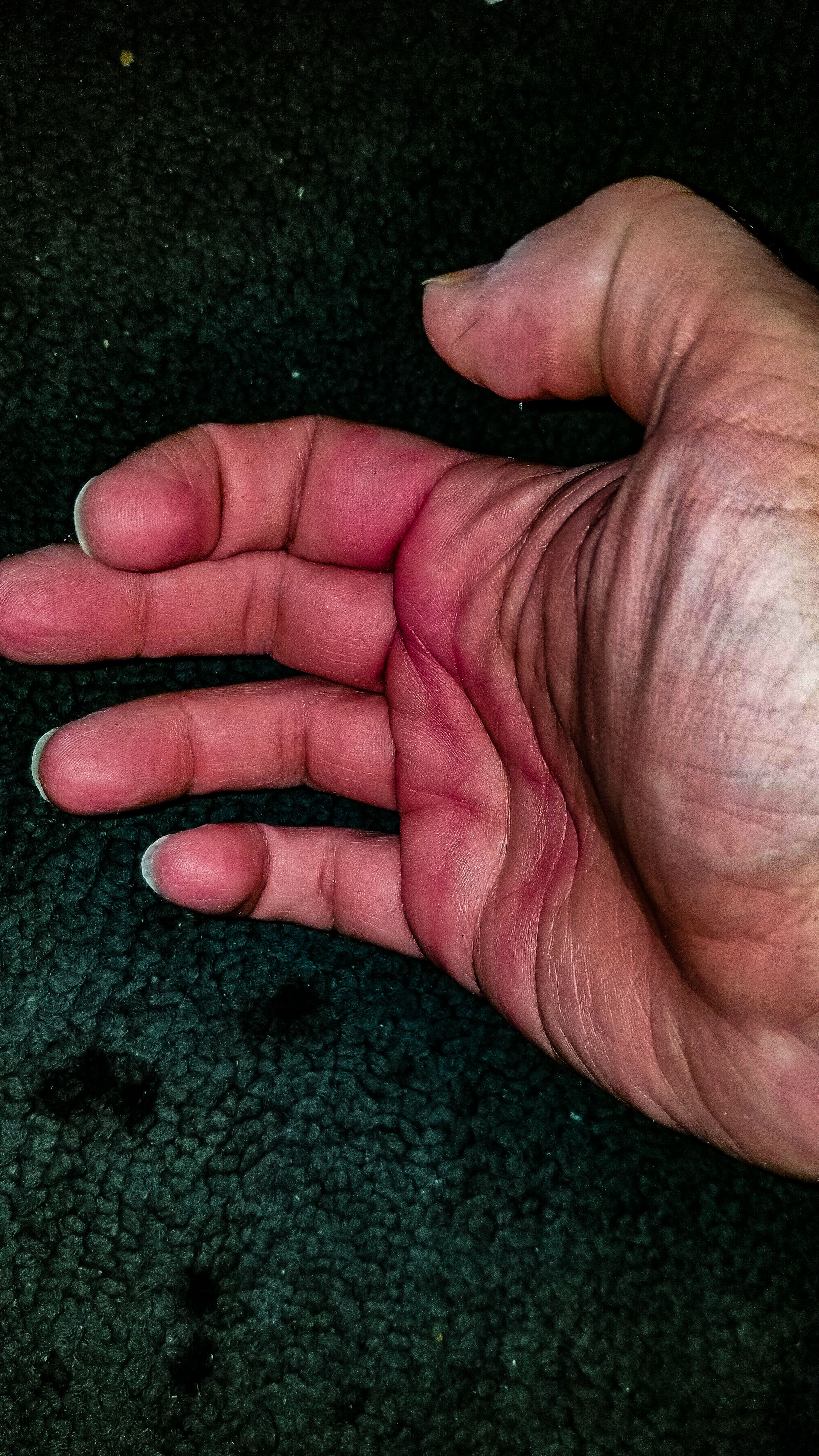 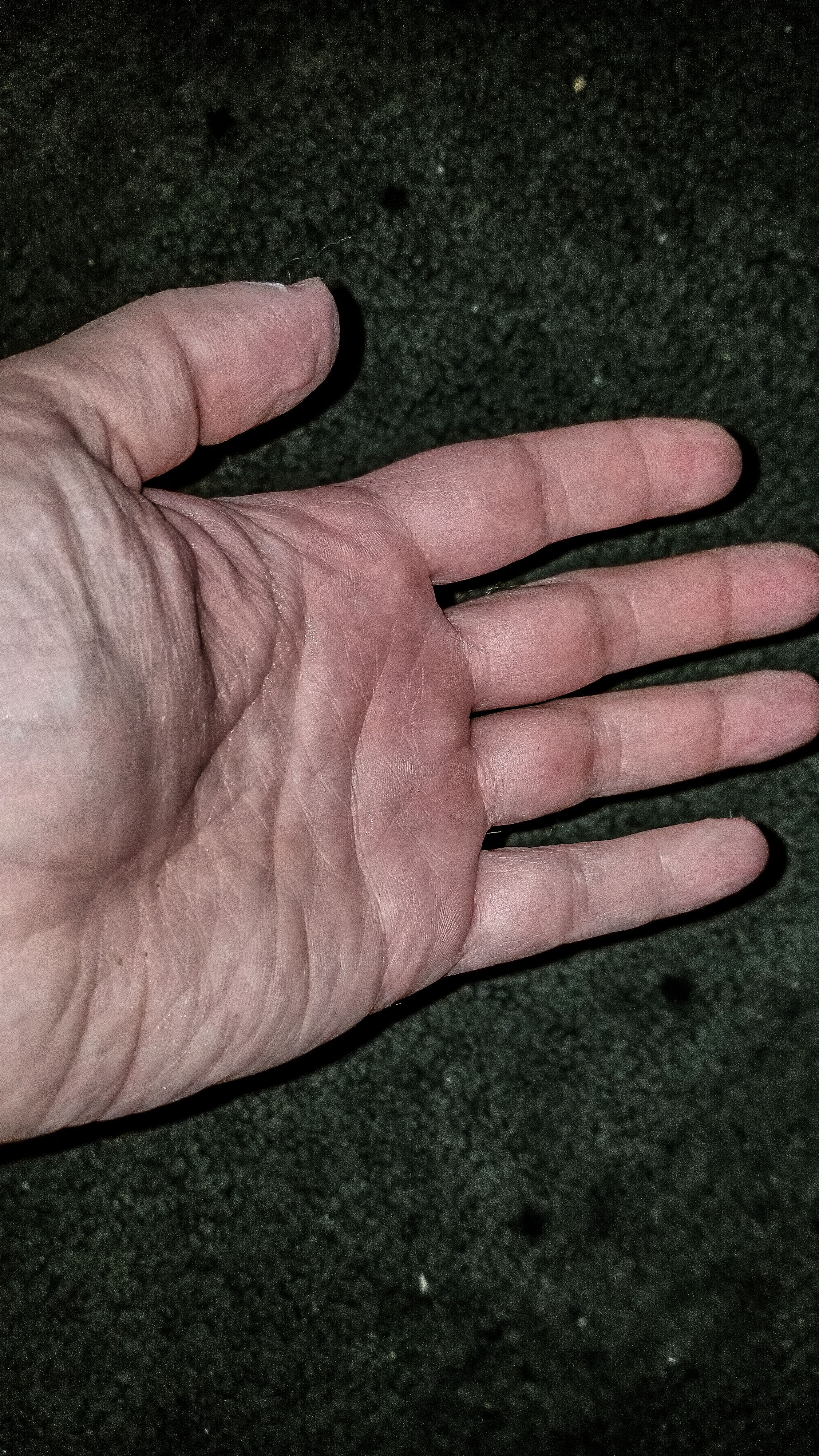 The last one is the other unbitten hand, just got hit with a few urticating hairs.

The thing is that I was almost done. In another 30 seconds, it would've been fine.

Ouch . I hope you don't suffer too much.

This is Mindy, older pic before her latest molt. She's currently sulking deep in her hide. 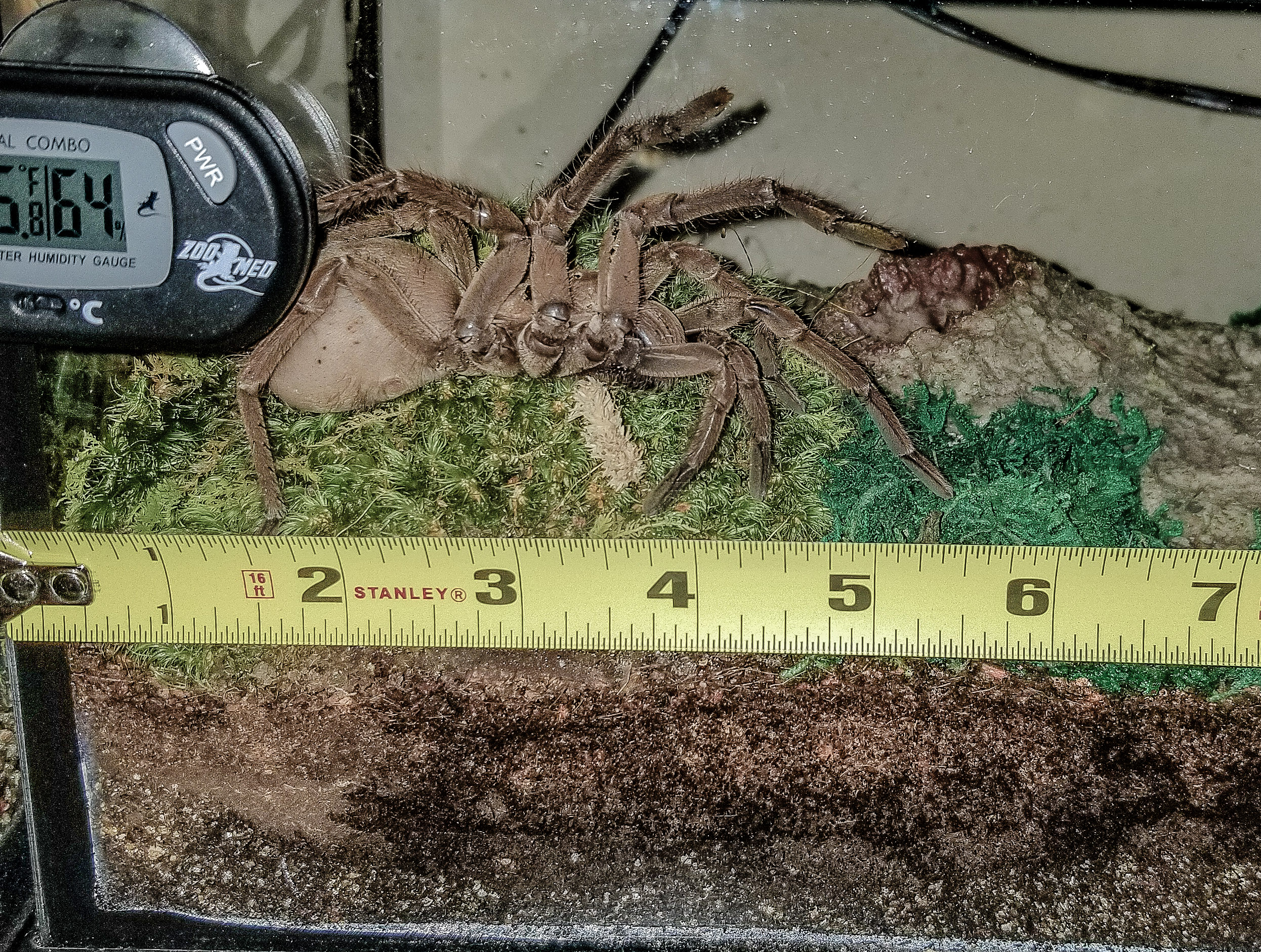 Thanks, hurts like hell, worst wasp sting of a lifetime.

Well done to you for putting the tarantula first.
I hope your hand is better soon, nasty looking bite.

Not fun at all. I can't see where you would have done anything else though , I once caught the blade of a set of electronic hedge trimmers in much the same way, a split second and 5 fingers cut to the bone, it's just a reflex action (they fell and the button hit the edge of the scaffold plank just as I caught the blade ).
I guess you'll have to look at it as a learning experience and record the details. Sorry to hear of your pain though.

My.....they do have big fangs.
Sorry @Whitelightning777 you got bit.
Glad your big girl is OK.
(Personally, I think I would rather get bit by than haired by one of those things!)

Glad that u caught her but not so Fangtastic about the bit .

I'm on the mend. The incisions have disappeared and there is only a slight amount of residual numbness. I should be ready to work tomorrow.

Strangely enough, I didn't really get hair exposure. I started washing it off almost immediately after I photographed the injuries.

The hairs are irritating but they are only "skin deep". Those fangs go real deep. It obviously hit at least one blood vessel and the bone under the bite itself actually hurt. The pain felt deep, unlike a wasp sting.

I'd rather take my chances with the hairs unless they would get into your eyes.

Whitelightning777 said:
I'm on the mend. The incisions have disappeared and there is only a slight amount of residual numbness. I should be ready to work tomorrow.

Strangely enough, I didn't really get hair exposure. I started washing it off almost immediately after I photographed the injuries.
Click to expand...

Glad to hear it.
I think it is worth keeping Anti-Histamine tablets on hand in case of OW bites

Benadryl and Claritan D really helped. Some fever on the first day but not too bad.
M

While I wouldn’t wish it on anyone, it’s really interesting to see a real account of the symptoms. When it does happen I don’t think people report back often.

Enn49 said:
Glad to hear it.
I think it is worth keeping Anti-Histamine tablets on hand in case of OW bites
Click to expand...

What are your thoughts on the venom extraction pens? Worth having one around?
I remember when I was a kid my mum used to keep a small sting remover in her bag as my sister reacted really badly to bee and wasp stings . Not sure if people have this sort of thing laying around just incase

Rs50matt said:
What are your thoughts on the venom extraction pens? Worth having one around?
I remember when I was a kid my mum used to keep a small sting remover in her bag as my sister reacted really badly to bee and wasp stings . Not sure if people have this sort of thing laying around just incase
Click to expand...

I'll be honest I don't know. It would be worth asking a doctor or pharmacist.

Doctor: no one knows I’d guess. Suction type devices have been tried on snake evenomation with poor results.

I've always heard the venom extractors for snake bites are useless. Still I have carried one in my truck for years. Read a story a few days ago about a hunter that was bitten by a large rattlesnake. He applied a tourniquet and as calmly as he could walked some distance to his truck where he kept an extractor. Doctor told him he wouldn't have made the 45 minute drive to a hospital without it. Maybe useless under most circumstances where medical help is available.

I think the main idea behind them is to reduce rather than completely remove. Maybe it could even have a slight placebo effect and reduce your own heart rate in turn reducing the speed the venom takes effect. It is interesting thou. I might look into it more
You must log in or register to reply here.
Share:
Reddit Pinterest Tumblr WhatsApp Email Share Link