How to sex your tarantula

plessey said:
The only real accurate way to sex a tarantula is by examining the epigynal area located between the anterior book lungs of the tarantulas shed skin but to do this you must first know what you are looking for.

This is a picture of the female sex organs located between the anterior book lungs (top pair).

The spermathecae: Only present in females these are the sacks where the males sperm is stored and come in a variety of shapes and sizes depending on the species. They can either be a paired structure (as shown in the pic) or a fused structure (usually a singular dome or tombstone shape) and branch off from the uterus externus. Fused spermathecae will start off as a pair and join together over the first few moults. The spermathecae is lined with cuticle and is therefor shed along with the rest of the old skin. Because of this any sperm that has been stored in the spermathecae will be lost after a moult in effect making the female virginal again. There are however two known species in which the females do not possess spermathecae and instead store the sperm in pores in the uterus internus. These are Sickius longibulbi and Encyocratella olivacea.

The uterus externus: Only found in females, this is a transparent tube of skin that connects to the uterus internus at one end and opens out to the gonoslit at the other end. The uterus externus is lined with cuticle like the spermathecae and is the only part of the uterus shed along with the rest of the old skin. It is the first point where the sperm and the eggs come into contact and is the most important feature in determining the sex of a tarantula from its shed skin.

The bursa copulatrix: This is the lower alcove that is formed below the spermathecae and the uterus externus. Again it is also only found in females and is believed to be the area where the sperm and the eggs mix before being deposited into the egg sack .

This drawing shows how all the parts connect with the organs that are not shed during a moult.

A brief description of other features mentioned -

Uterus internus. A short section of tube that connects to the uterus externus at one end and to the oviducts at the other. This along with the oviduct and ovaries is not shed.

Oviduct. Two tubes that lead to the overies.

Slit sensilla. These are internal stress receptors that sense any stresses on the spiders exoskeleton.

Arthordial membrane. These are muscle attachments that define the left and right hand sides of the epigynum.

Gonoslit. This is the opening to the females sexual organs. 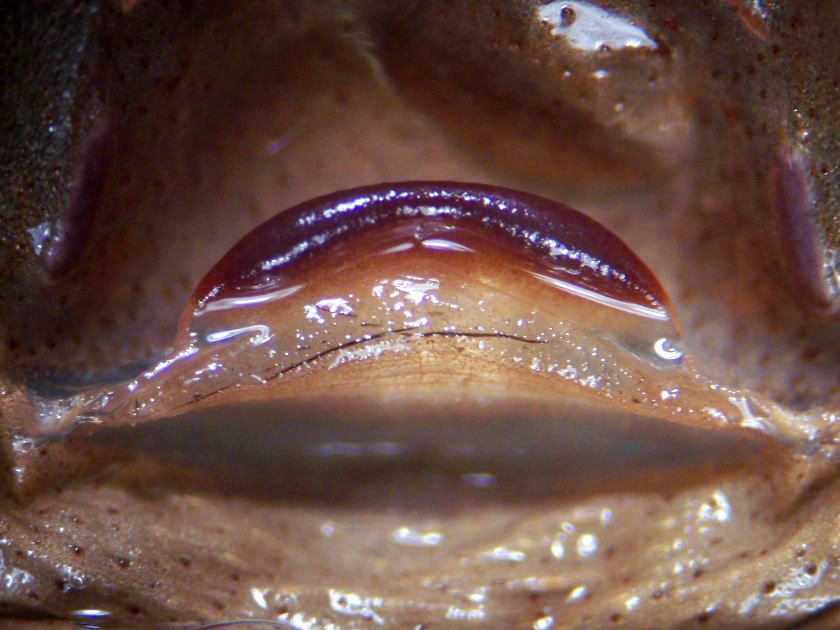 another example of paired spermathecae

Encyocratella olivacea - note that although there is no spermathecae there is still a uterus externus and bursa copulatrix.

The gonopore. This is the opening in the centre of a males epigastric furrow that leads to the testes. The testes are 2 long coiled tubes that produce sperm and also act as sperm ducts.

You can see the male accessory organs marked in green here and the lips of the gonopore circled in red.

Pic of male accessory organs from a Poecilotheria regalis notice they are wider at the base than at the apex.


PREPARING THE SKIN
Unless you have just retrieved the skin from a freshly moulted spider then the skin will be very dry and brittle making any attempt to sex it almost impossible. The most common method to moisten the skin and make it pliable again is to soak it in water with a drop of washing up liquid however i find it is much easier just to give the skin a good spray with a mister for a few seconds.

Once the skin is pliable take hold of the abdomen skin where it joins the carapace and gently pull down on it so that the skin unwinds then cut off the excess skin below the posterior book lungs.

Next take a needle and run it down the abdomen skin from the pedicel (where the abdomen joins the cephalothorax) to the posterior book lungs and carefully open up the skin.

Hope this has been of some help, for more information on sexing tarantulas read Sex determination of immature theraphosid spiders from their cast skins by Kathleen and John Han****.
Click to expand...

Better than any reference book I have ever read.....still not sure I would be able to do myself but this gives me a fighting chance. Thank you

these are pictures from my Rosea's last shed 4 years ago. If i am looking at this correctly these are female sex organs correct??

Amy Hinkley said:
these are pictures from my Rosea's last shed 4 years ago. If i am looking at this correctly these are female sex organs correct??
Click to expand...

Correct! Great pics! That dark area is interesting; did she have a cyst or something there?
W

This is my brachypelma vagans my first T. Actually im new to the hobby but quickly falling in love with it and was curious on the sex is it a female? He/she hasn't molted yet so I think I could tell better then it's only about 2 1/2 Inchs or so but any help or advice would be greatly appreciated.

Thanks for posting this!

3 Year Member
Informative article! Thanks! But I’m still confused at what I’m seeing. This is an N chromatic. TIA

Damn spell check - chromatus. But you guys knew that.

She's a girl. I outlined the lady bits. A male would be smooth there.

Thank you very much for this post. Thats why this forum is so good. Nobody insults nobody. People here share, inform, learn and teach. Amazing!!

Got to be a girl. You can see the"ears" popping up from the spermatheca. Congrats!!

Not the best pic but looks female.

Look at the slit between the anterior (front) set of book lungs, those two mushroom-like protrusions are the spermatheca.

1,000+ Post Club
3 Year Member
Tarantula Club Member
You got a female, like others pointed out already! Congratulations

1,000+ Post Club
3 Year Member
Tarantula Club Member
I always want to reply to the "how to sex my tarantula" question with