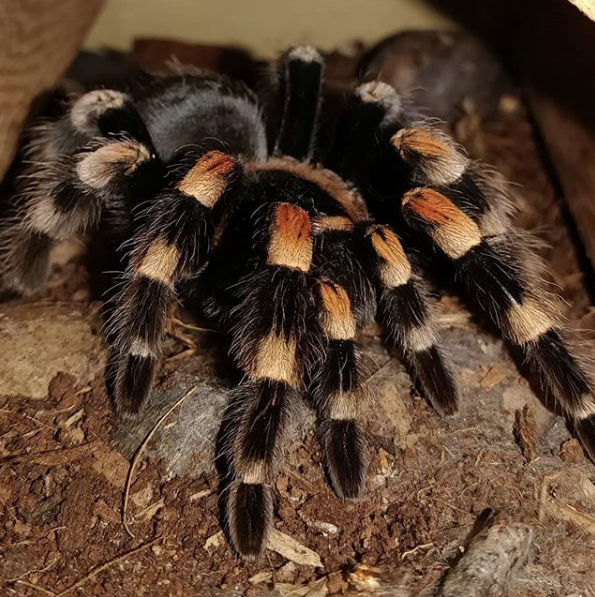 Whether you are a seasoned tarantula owner or a first-time newbie, the same thoughtfulness and consideration should be applied when contemplating your next arachnid purchase. While you may be instantly attracted to a vibrantly colored spider that catches your eye at a pet convention or exotics dealer, it is important to educate yourself on the specific breed as well as assess your personal skill level as a tarantula keeper before making the pivotal decision on whether or not to add it to your collection. Because not all species are the same, an uninformed purchase can cause an inexperienced owner to have a negative first-time experience with an unfriendly spider that may prevent them from pursuing the exciting hobby of tarantula ownership. In this article, we will discuss the different distinct features that can help enthusiasts decipher between common pet tarantula species from the Old World and New World, as well as the risk factors of owning such a spider including being bitten or stuck with urticating hairs.

In the absence of internet access for quick species identification or the presence of confusing scientific names, with some basic knowledge of the characteristics of the two main classifications of tarantula, you will be able to better distinguish between the features of tarantulas you may come across in your quest for a new 8 legged companion. Tarantulas found in the Old World (Africa, Europe, Asia, etc.) and tarantulas that are native to the New World (North and South America) each carry unique regional characteristics as well as defensive behaviors that can be pivotal in your decision when choosing your first pet tarantula. The Red Knee above is a classic example of a beautiful terrestrial New World Tarantula.

Old World tarantulas are commonly known for their aggressive temperaments as well as bites which typically carry more venom than their new world counterparts. The risk factor that comes with the Old World spider’s anti-social nature and potent bites makes them perfectly suited for the more experienced tarantula keeper with intermediate to advanced levels of arachnid keeping experience. The following spiders are among the most common old-world tarantula varietals in the arachnid trade:

Baboon tarantulas: Baboon tarantulas are terrestrial (land-dwelling) species primarily native to the African continent. Common varieties such as the King Baboon (Pelinobius muticus) which is often a rusty brown or orange color with enlarged rear legs and glistening fangs, and the Rear Horn Baboon (Ceratogyrus darlingi) which has a distinctive horn on the center point of its carapace, prefer to burrow for shelter. These spiders will often be found in stores in enclosures prepared with coconut fiber or moss substrate to mimic solid land and allow tunneling. Baboon tarantulas are highly aggressive and territorial not meant for handling. Bites from these spiders can cause serious adverse effects. With the 10-12 year lifespan of the Rear Horn Baboon and the 20 plus year lifespan of the King Baboon, buyers should not take on the commitment of either of these spiders without extensive tarantula ownership and expertise.

Cobalt Blue tarantulas: The cobalt blue (Cyriopagopus lividus) is a staple in pet ownership for tarantula enthusiasts. The species is native to Southeast Asia and commonly found in countries such as Thailand, Burma, Vietnam, and Laos. The distinctive radiant blue coloring found on the spider’s legs and silverish gray markings on the body make identification much easier for pet buyers with a less experienced eye. Similar to the Baboon tarantulas, the Cobalt Blue is a highly aggressive terrestrial spider that should under no circumstances be handled. Cobalts will be found in the discerning pet stores in enclosures with a deep substrate of moss, coconut fiber, or potting compost that allows the tarantula to create elaborate tunnels and burrows. While female Cobalt Blue tarantulas can have life spans over 20 years, they require the expertise and commitment of advanced level spider owners.

New World tarantulas are characterized by their more docile nature, tendency to allow for handling, and fewer health risks involved in a bite or sting. New World tarantulas defend themselves by flinging urticating hairs which line their body and legs at predators, which can cause rash or irritation to the exposed skin. While adverse reactions can occur when the hairs come in contact with the handler's eyes, or some cases cause an allergic reaction, New World tarantulas are typically far less of a liability to the safety of their owners than am Old World type. Of the many different species of tarantula that can be found in the Americas including the Caribbean, the following are excellent options for beginners:

Pink Toe Tarantula: Pink Toe tarantulas (Avicularia avicularia) are native to Central and South America in countries ranging from the southern Caribbean to Costa Rica and Brazil. Mature specimens of the spider will exhibit a darkly colored body and legs which are each capped off with the telltale pink or orange feet, hence the name pink toe. Pink toe tarantulas are arboreal species which means that they live in treetop canopies and foliage in their native habitats. While pink toes may in some cases deliver a mild bite during handling, the tree-dwelling nature of the spider may jump from the owner when startled. When settled in a terrarium with ample foliage humidity, and branches to simulate a jungle environment, the female pink toe tarantula will live a rewarding life of up to 10 years and is an excellent option for individuals looking for a reasonably priced intro-level arboreal tarantula that can be handled (with caution.)

Rose Hair Tarantula: The Rose Hair tarantula (Grammostola rosea), which is native to the South American countries of Chile and Argentina is commonly found in arid environments including deserts and grasslands with abundant scrub-brush. Also known as the Chilean Fire tarantula, the Rose Hairs are identifiable by their black or brown bodies covered in fire-like red, orange or pink hairs. Similar to other New World Species, the Rose Hair tarantula can deliver a mild bite or fling irritating hairs when agitated or threatened. To satisfy the habitat needs of a Rose Hair tarantula, owners should provide a substrate of sand-based soil or orchid bark along with a hide made from cork or driftwood to allow the spider a safe space when provoked. While the Rose Hair tarantula can be temperamental, it often chooses to either retreat or give visible warning signs before attacking, making it a great beginner choice for those who want to start along the path of tarantula keeping without the need for the elaborate jungle habitats that tree-dwelling spiders prefer. Female Rose Hair tarantulas can live for over two decades.

Curly Hair Tarantula: Curly Hair tarantulas (Brachypelma albopilosum) are a terrestrial burrower native to Central American countries Costa Rica and Nicaragua. Similarly to the Rose Hair Tarantulas which prefer arid environments, the Curly Hair tarantula can be found in grasslands, scrub brush, and cleared rainforests being repurposed for farmland. The Curly Hair is commonly identifiable by the curly, fur-like hairs that cover the majority of its body as well as golden-bronze highlights given by longer lightly colored hairs mixed throughout the body and legs. Considered one of the more docile tarantulas, the slow-moving curly hair is hesitant to fling its irritating urticating hairs, preferring to avoid aggressive behavior. When provided a habitat with properly humidified coconut fiber or moss substrate as well as ample hiding space, the female Curly Hair tarantula can live a happy life of 8 to 10 years. The Curly Hair Tarantula is perfect for those who want a docile, easy-going spider that is known for its inherently peaceful nature.

Picking a first (or 40th) tarantula is a highly personal decision that is unique to every buyer. Before pulling the trigger on the purchase of a spider, remember to always do your research before adoption. Choosing a tarantula that requires care outside of your level of experience can lead to an unenjoyable experience for all parties involved and you should always consult your friendly neighborhood pet shop employee with any questions you may have about spider care or habitat maintenance.
Reactions: Jeremy-psychonaut

There are no comments to display.