Hi all
Getting a little concerned about my Nhandu Chromatus lately.
Bought the spider on 25th October as adult female.I am pretty new to the hobby and the seller warned me she is a bit tetchy but after me explaining that I am serious about the hobby and not going to handle the sell went forward.I have housed her in a 40cm x 29cm x 24.5cm high Komodo plastic enclosure without incident but she was nervous as expected and gave me plenty of threat postures.Boy she was mad.Here is a not very good pic of that day. 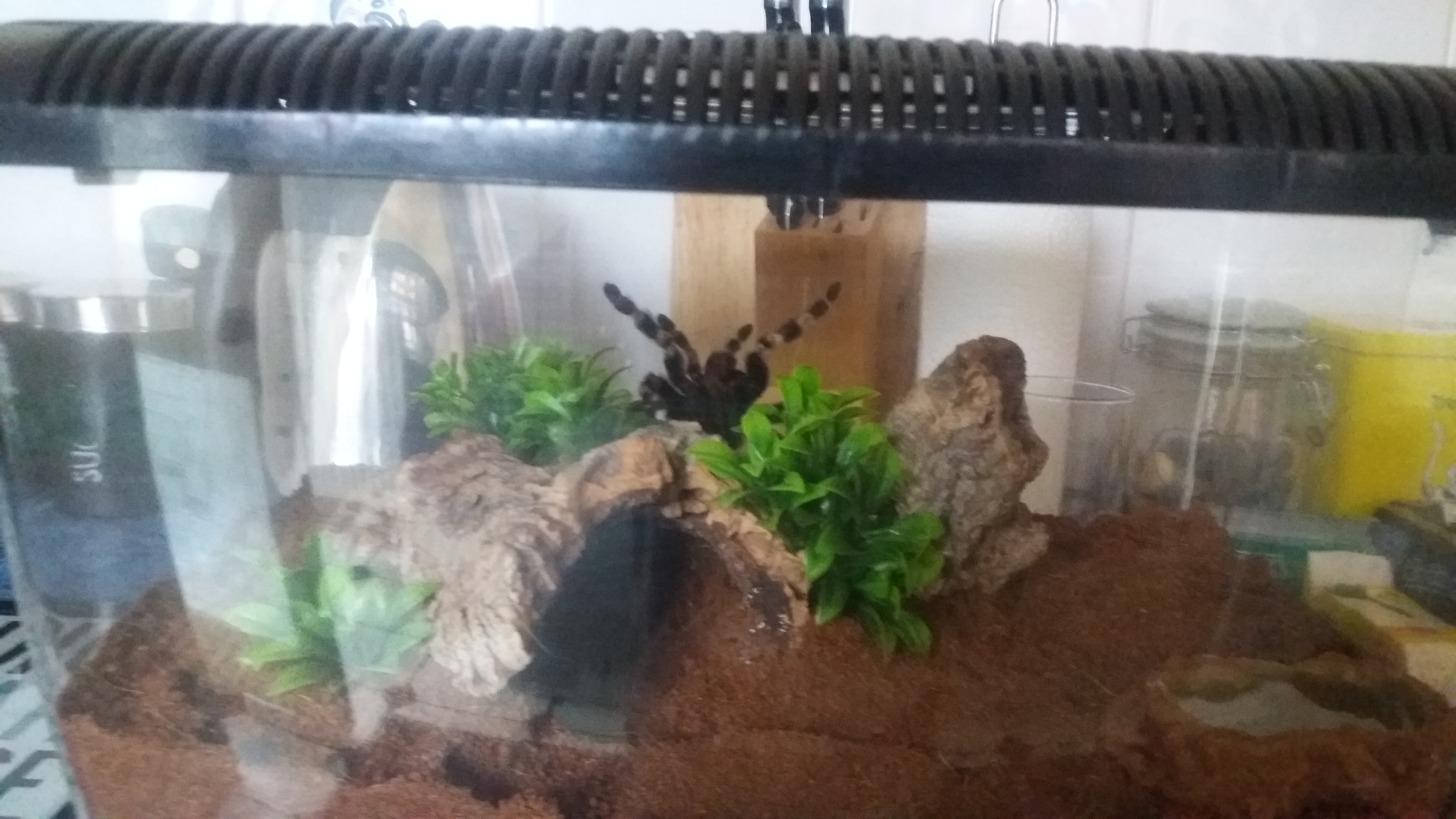 And another of her enclosure 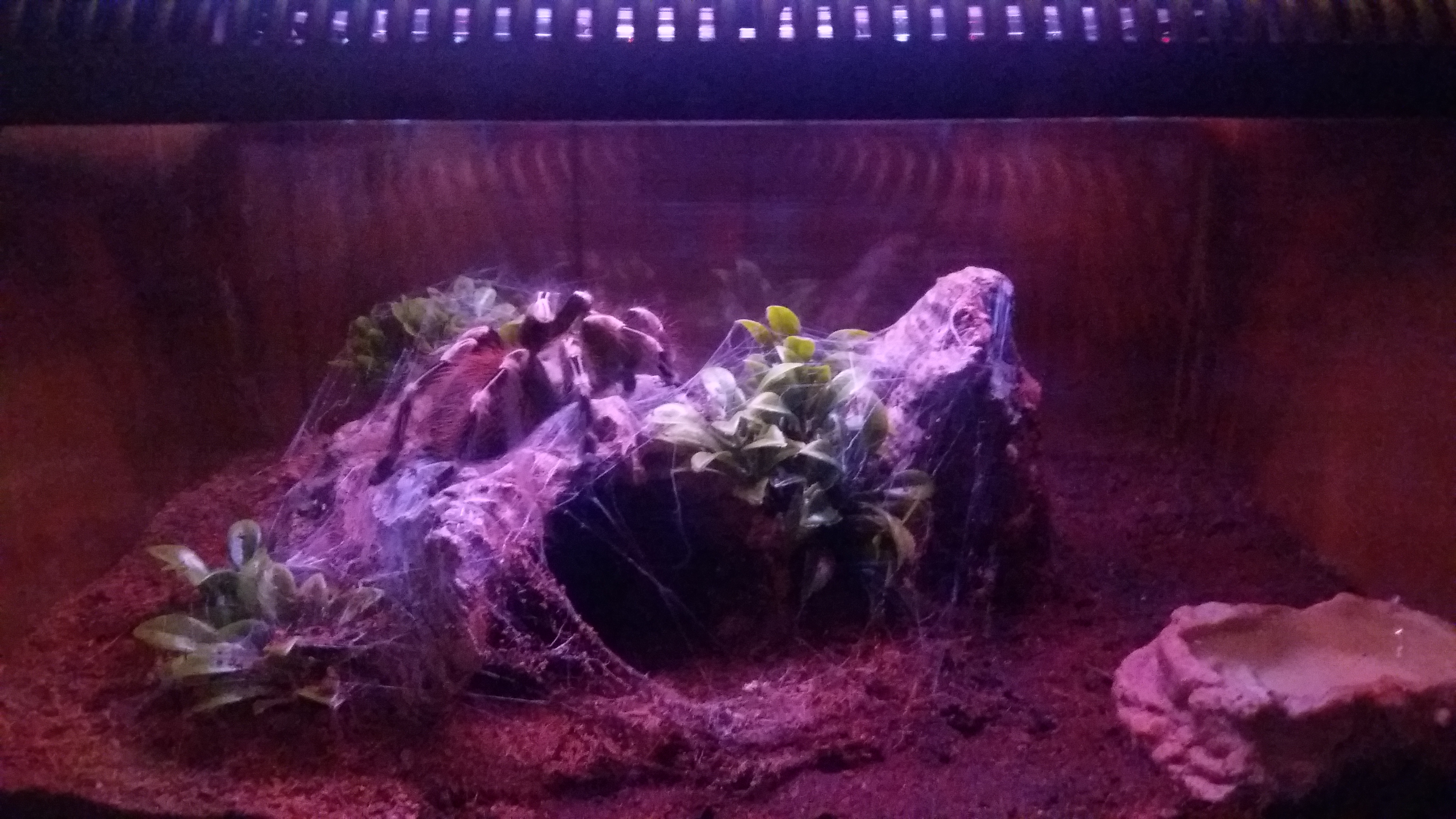 Anyway I left her alone to settle till 31st October and fed her adult dubia roach as adviced by the seller.She went for it like a tank.Later on 4th November I fed a large cricket.This one she missed first time but after a while I got it out and dropped it next to her and she had it.By that time she was settled and using her hide often hanging on the entrance like Ts do.My husbandry routine is once a week to clean water bowl and refill it .I moisten about 1/3 of substrate and let it dry before I moisten different third.Once per week I offer pray item.Lights are low power leds with no temperature to affect the T.Use mainly red setting for viewing when Im arround in evening for couple of hours and rarely white for maintenance.Temperature is between 20-24°C.Arround mid November I fed another dubia.I did not find a bolus but thought she just have hidden it in the hide.On first of December fed another and next morning saw two in there so I took them out.So had one Dubia burrowed for a while in the enclosure .She seems to be affraid of them big Dubias now cowering away from them.She ate on 7th, 16th and 25th of December when I dropped 2 crickets together and she only took one on all occasions and had to pull one out next morning.I tried to feed one dubia with crushed head as makes them move more about on 3rd January but again she moved out of the way.
Overal she has a meal now and then but her abdomen is slightly smaller now from the day I got her.She is very calm and have no hairs being kicked at me or any threat postures wich is a but surprising for me after reading about their attitude and appetite.After last week when I moistened the substrate and some water went in her hide she abandoned it and sits in back of the cork barks now where is also moistened last time.Today during maintenance I touched her with a paint brush to see her reaction before I open the enclosure and she didnt move at first but then after I insisted she went on the side of the enclosure instead running to the hide as she used to do.The hide is almost dry now as is all surface of the enclosure.Thinking about letting the enclosure to dry completely.
I wander if I am doing anything wrong.
Thanks for reading and any thoughts are much appreciated.
Regards Konstantin
Last edited: Jan 16, 2020

1,000+ Post Club
Premium Member
The LED could cause problems. That bright LED can cause damage to their already bad eyesight. Might want to set it up so it's not blinding. That could be why she sometimes takes a cricket or not. She might relying on other senses to hunt now. Could be why shes calm also...she cant see any more. Try touching her front fangs with a paintbrush and see what she does...I'm curious.
K

Hi @Arachnoclown
The led is a cheap Chinese led tape kind and is only 10 actual not very strong led SMD5050 chips spaced over 30 cm lenght.It has a dimmer function and is set to only about 10% red light when I view as dont need it stronger as is usually night and dark in the room.
Here is pic of the bookcase they are in with light on.The light on the pics seems a lot brighter than it actually is. 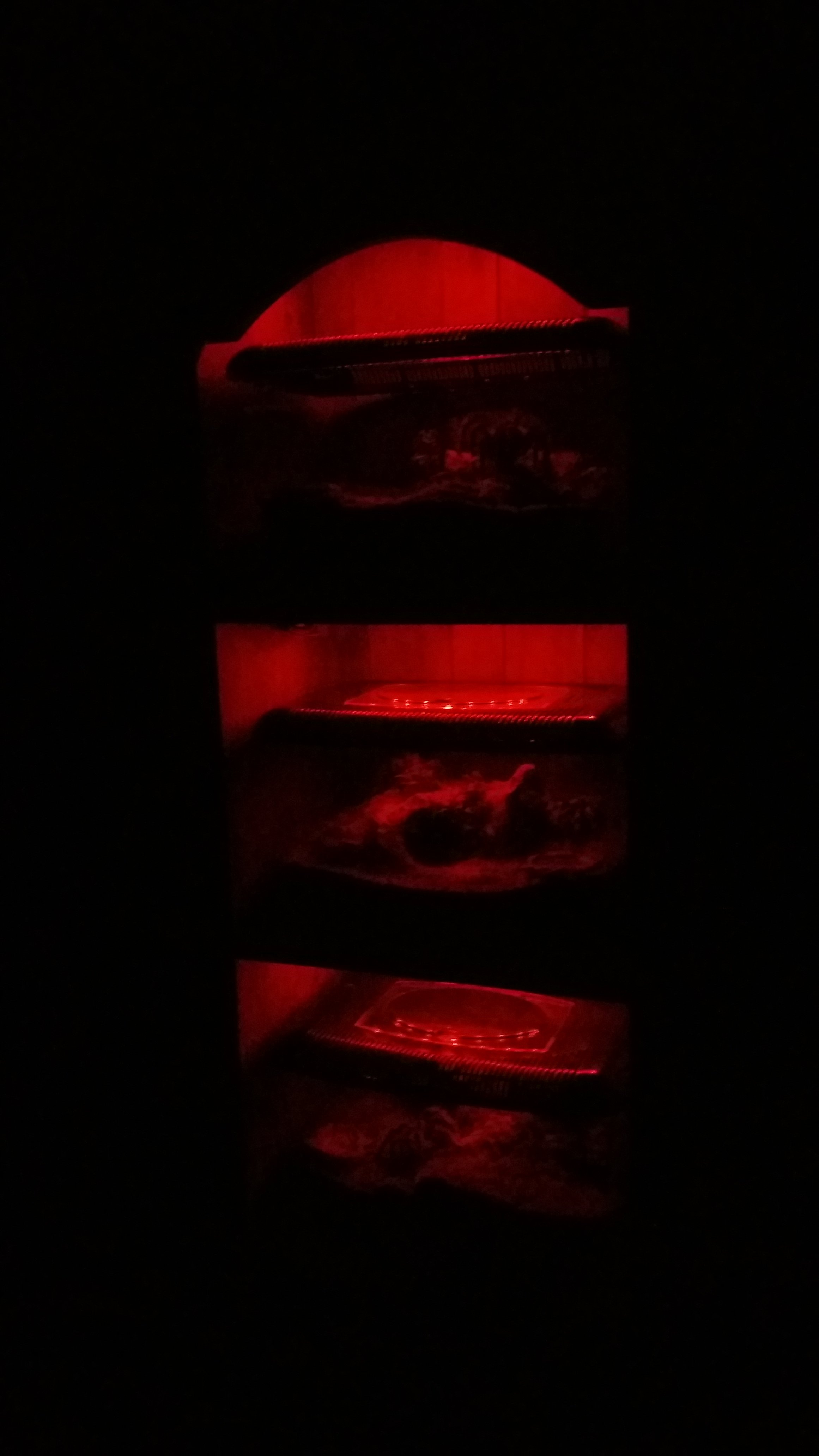 I doubt is related as have 3 more Ts in same light situation and thay all have hides to have option to get away from the light they are all well and doing what they should apart from my Aphonopelma chalcodes female that has not eaten since September 2019 but she has nice big round abdomen. Pic of her 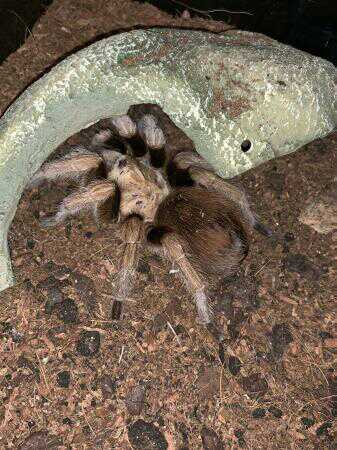 The Nhandu has a pray item now and if is not gone tomorrow morning will take it out and try to touch her fangs for you and let you know what she does.She is a bit stubborn sometimes tho.Should I insist on a reaction?Does my husbandry routine and enclosure setup seems ok to U?Any comment regarding letting the enclosure to dry completely as have not noticed her taking preferences for moist substrate and have seen her drink i past.
Thanks for your comments
Regards Konstantin
Last edited: Jan 15, 2020

Arachnoclown said:
They all look healthy to me...everything sounds good.
Click to expand...

Hi
Thanks for reassuring me.Its good to know U do things right.
The Nhandu Chromatus ate his pray over night. I removed the bolus this morning and to satisfy your curiosity went to touch her fangs with a paint brush.As soon as I got close(about 1 cm from her face) she twitched and gave me light threat posture but did not strike .I did not insist further. Hope that helps.
Regards Konstantin
You must log in or register to reply here.
Share:
Reddit Pinterest Tumblr WhatsApp Email Link