Your best T and why??

1,000+ Post Club
3 Year Member
Hi guys/girls..
So what's your favourite T you have in your collection and why?

My favourite T in my collection to date is my B.Albop called Oliver .
He is always sitting out in the open and never moves when I open the enclosure. And he eats really well

3 Year Member
Now that's a hard one to answer I'm going to go with two my GGB because of colour and is always on show also never refuses food,then there is my H.Macs because of the different shades of the same colour...

Staff member
1,000+ Post Club
3 Year Member
Tarantula Club Member
Impossible to say. I chose them all for their colours and/or patterns with the exception of my first curlie that I fell in love with. I suppose if I had to choose it would be a tie between my P. metallica and my O. diamantinensis, Both have amazing colours/patterns, great feeders and relatively calm. 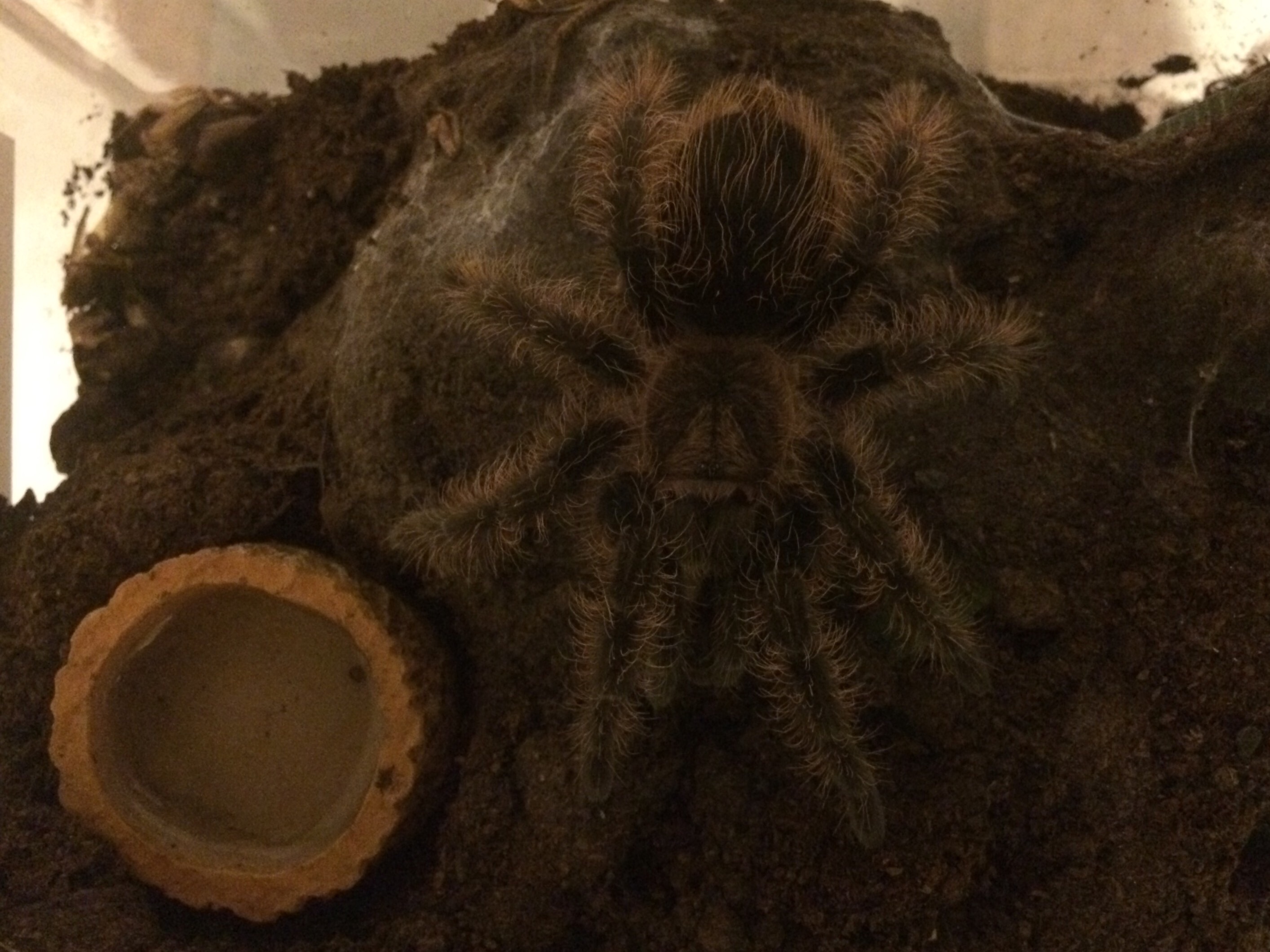 my sisters daughter named my curly after my brother who has curly hair..
But it could be a female and I didn't want to say lol
Might need to change to Olivia lol

3 Year Member
My "best" is my B. albopilosum. She always eats, out in the open, very docile and a real bulldozer with her substrate.

My "favorite" is my breeder H. lividum. Gorgeous blue, awesome mother, tackles prey with a vengeance and is NOT a "pet hole".

1,000+ Post Club
3 Year Member
Very hard to chose because they're all different and beautiful.
If I had to chose 3, in no particular order:
My A. Genic. She's beautiful, confident, but also makes me laugh with her behaviour. Last night I refilled her water bowl and she kept jumping at the water again, she's nuts. She's also the one I don't really worry about, she's always eating apart from when in premolt and even though she's lost the tip of her fang during her last molt, she's not handicapped by this.
My G. Rosea, because she's my first. She's a lovely RCF, not a pet rock rosea, apart from at the moment (I'm kind of hoping she's in premolt). Usually she's always visible and comes up to the front of her tank. She eats reasonable well for a Rosea and her fasting periods are not too long.
3rd place is between my GBB, B. Boehmei and my A. versi: My GBB because it's very confident and always visible. It's got plenty of plants and wood to hide behind or under but just webs up on top of it and happily sits there. It never refuses food, other than in premolt.
My Boehmei, because it's a nice grower (molted 3 times since I bought it), good eater. At the same time it doesn't seem to have been blessed with a lot of brains. It's not the best hunter, tries to catch the prey, missed a lot of times and usually searches in the wrong place for ages. It doesn't go hungry though, because the crickets will eventually get tired enough for the sling to catch it.
My A. versi is of course very beautiful. It's also a great eater and has a very cute feisty, nearly "old world" attitude. When I took "her" (I think she's female) last molt out she was boxing at the tweezers and when I rehoused her the other day and gently tried to nudge her into the holding container with the paint brush, she went for the brush without warning. She's now settled in nicely and has started webbing up where we can see her, yay!
As you see, i can't pick and now feel bad for not choosing the other 4, lol.

1,000+ Post Club
3 Year Member
@Entity . I started this thread so people can see what are other peoples best T's so you give you a good idea what your next T should be ;-) lol
Only a matter of time .
I've been keeping T's now since November and have 13! And more to come .
Won't be long till you are telling us you have more on the way lol

Entity said:
lol. I do have one on the way...lol a GBB next week.
Click to expand...

1,000+ Post Club
3 Year Member
Um...lol not sure if ud call it a sling or a juvi. Its is small but its big enough that the breeder knows its a female. about 2 inches. Juvi i guess? right?

1,000+ Post Club
3 Year Member
I think so, lol. I never know for sure neither what to call them at certain sizes. Personally I call them slings until they start showing adult(ish) colours, and then juvi until they look like a smaller version of their adult self, then I call them subadults... I don't know if that's right, lol.

Nice, that you're able to get a sexed female though. They're such lovely spiders and so easy going.

1,000+ Post Club
3 Year Member
They r easy going? I have had a couple people tell me not to be trying to hold her or anything cause they r pretty skittish and can be defensive.

Entity said:
They r easy going? I have had a couple people tell me not to be trying to hold her or anything cause they r pretty skittish and can be defensive.
Click to expand...

I didn't mean that, as in they tolerate handling (I've not handled any of mine, apart from the Rosea that was put on my hand by the shop owner). I meant they don't require any super specific husbandry, and at least mine doesn't throw a panic attack or tissy fit every time I open its enclosure to feed it.

3 Year Member
Poecilotheria tigrinawesseli,
pokie that looks the most beautiful to me