L. parahybana eggs (and some with legs)

Hello everyone! Found and joined the forum last week.

After having bred once, a bit over ten years ago, I had another go at it last year, during the summer. I have a very large female L. parahybana and another, subadult female. Knowing full well how many babies these can have, I went ahead anyway since it is a great and easy species to get into it again. Bought a male during the summer and mated him with the adult female multiple times over the span of a month, with only one successful insertion witnessed and a lot of lifesaving skills on my end to keep the male alive.

Later on, I noticed constant tapping and upon investigation found the subadult female tapping furiously with the male responding. So I thought, what the heck, why not. Put the male in with the female and there was instant love, but it was also instantly over. No insertion witnessed and a lost leg for the male later I decided to not do any more attempts. One thing I must say and that is very different from for example my breeding ten years ago, this species will go out of their way to try and consume the male.

Anyhow, the male is still alive and kicking (and has started eating after all these months). In January I witnessed the subadult female laying eggs. I pulled the sac about 30 days later and incubated it using the exact same tools I had used the very first time: a tub filled with water and a pantyhose over it. Here are some pictures of the start: 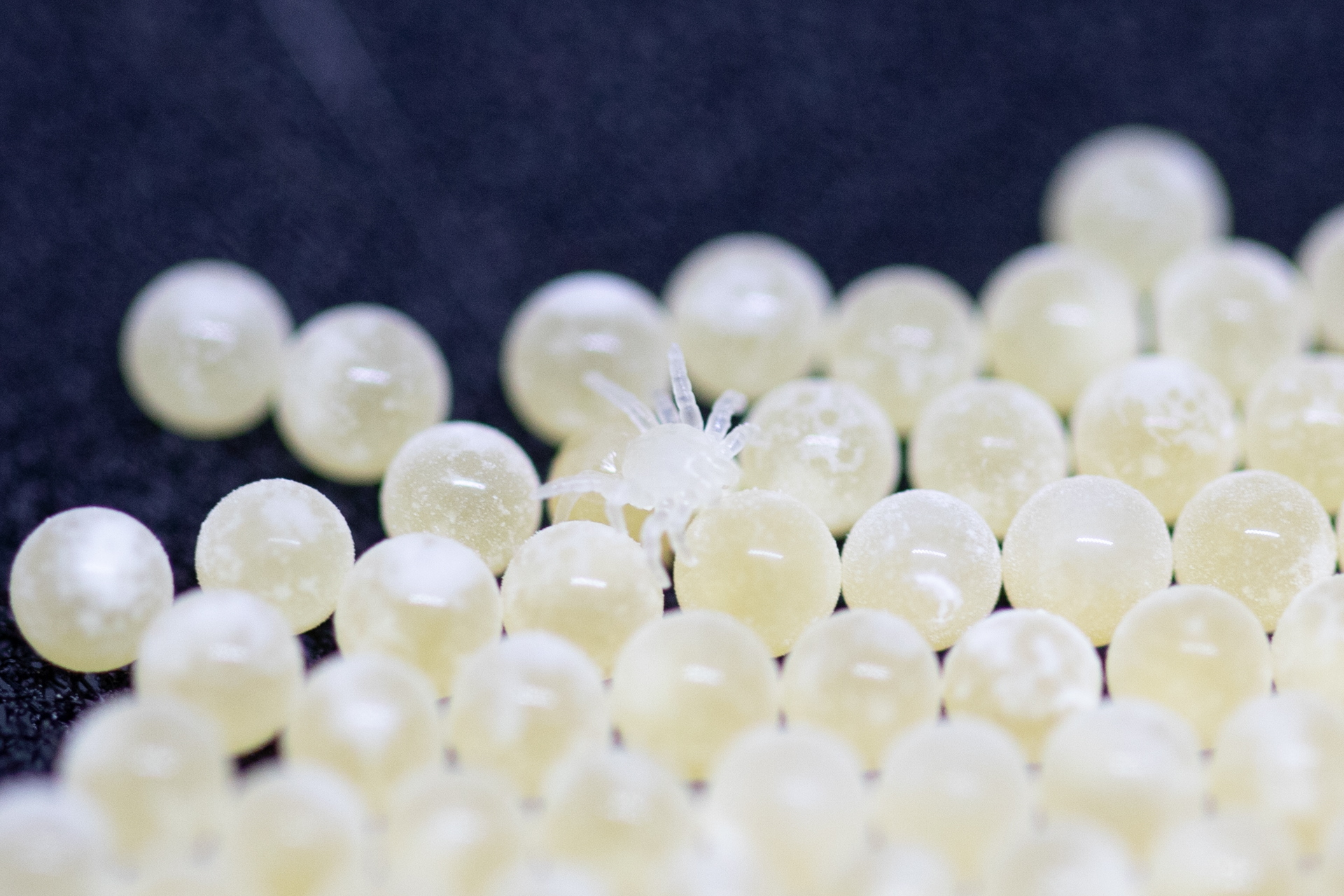 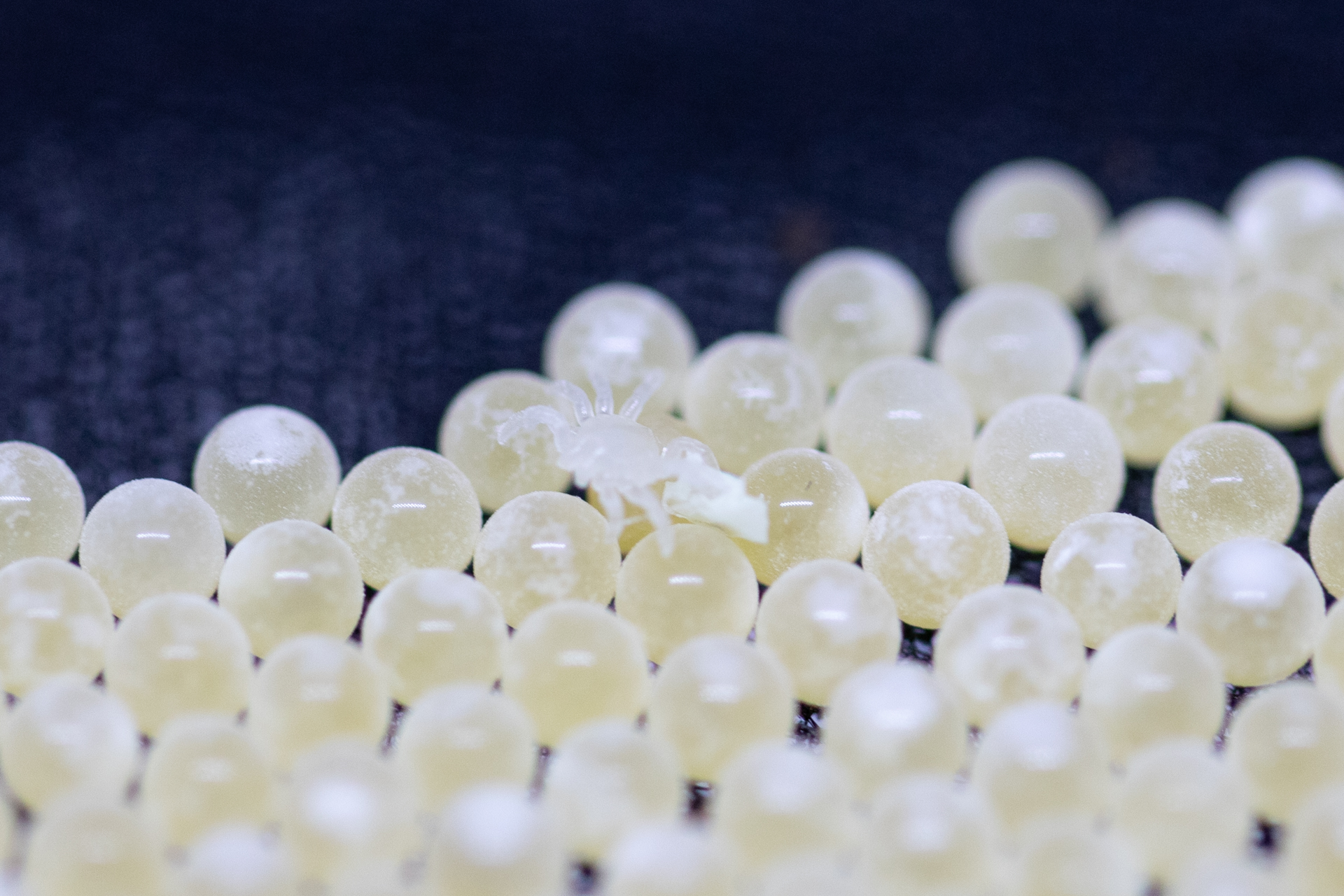 I did a live sac opening through streaming for a couple of friends and then I took the above pictures on a later date. Even further on, more eggs with legs started to appear: 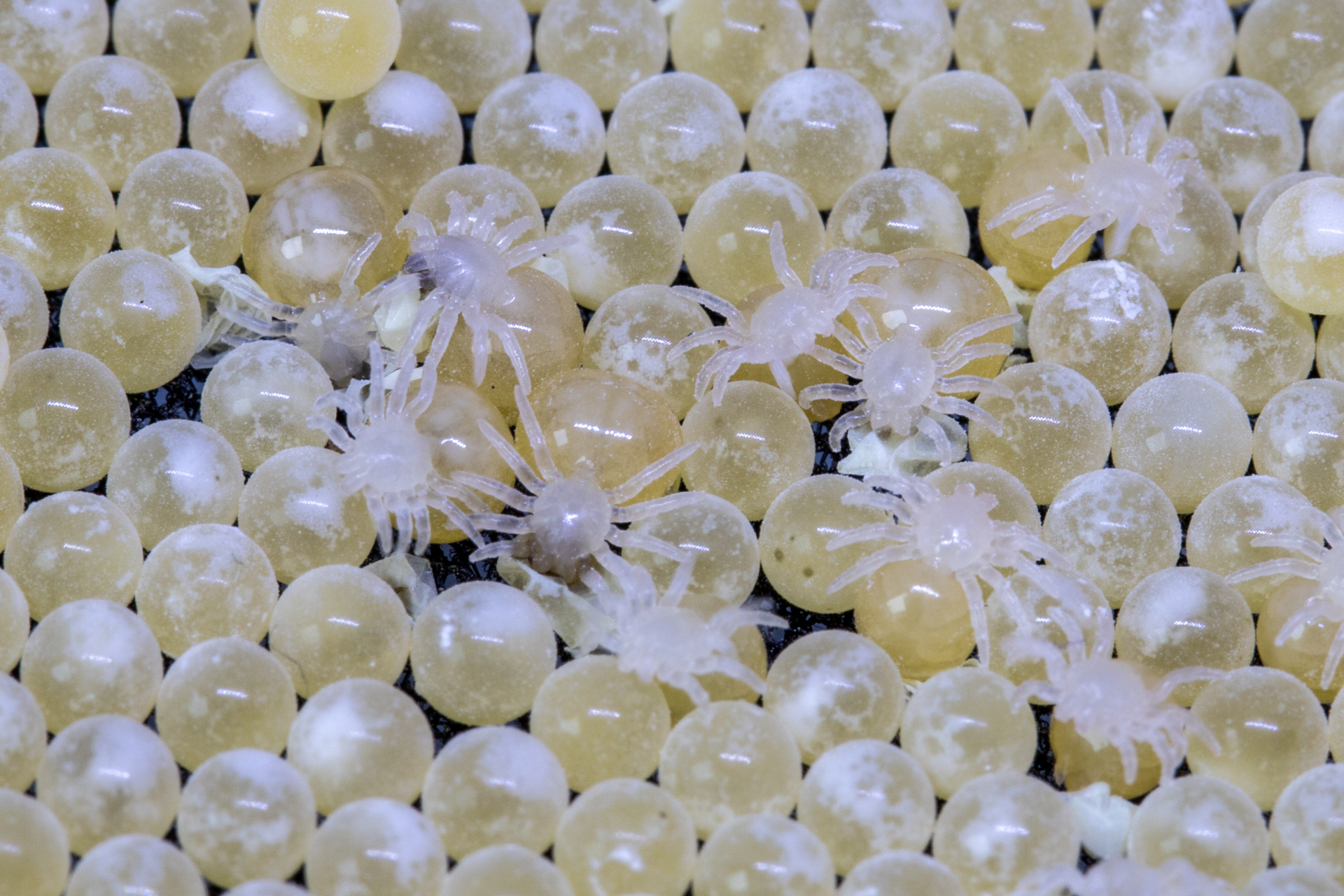 It has been nearly a month since pulling the sac and incubating and today I took some new pictures. I have since had to remove some bad eggs and it appears that many eggs might be staying eggs: 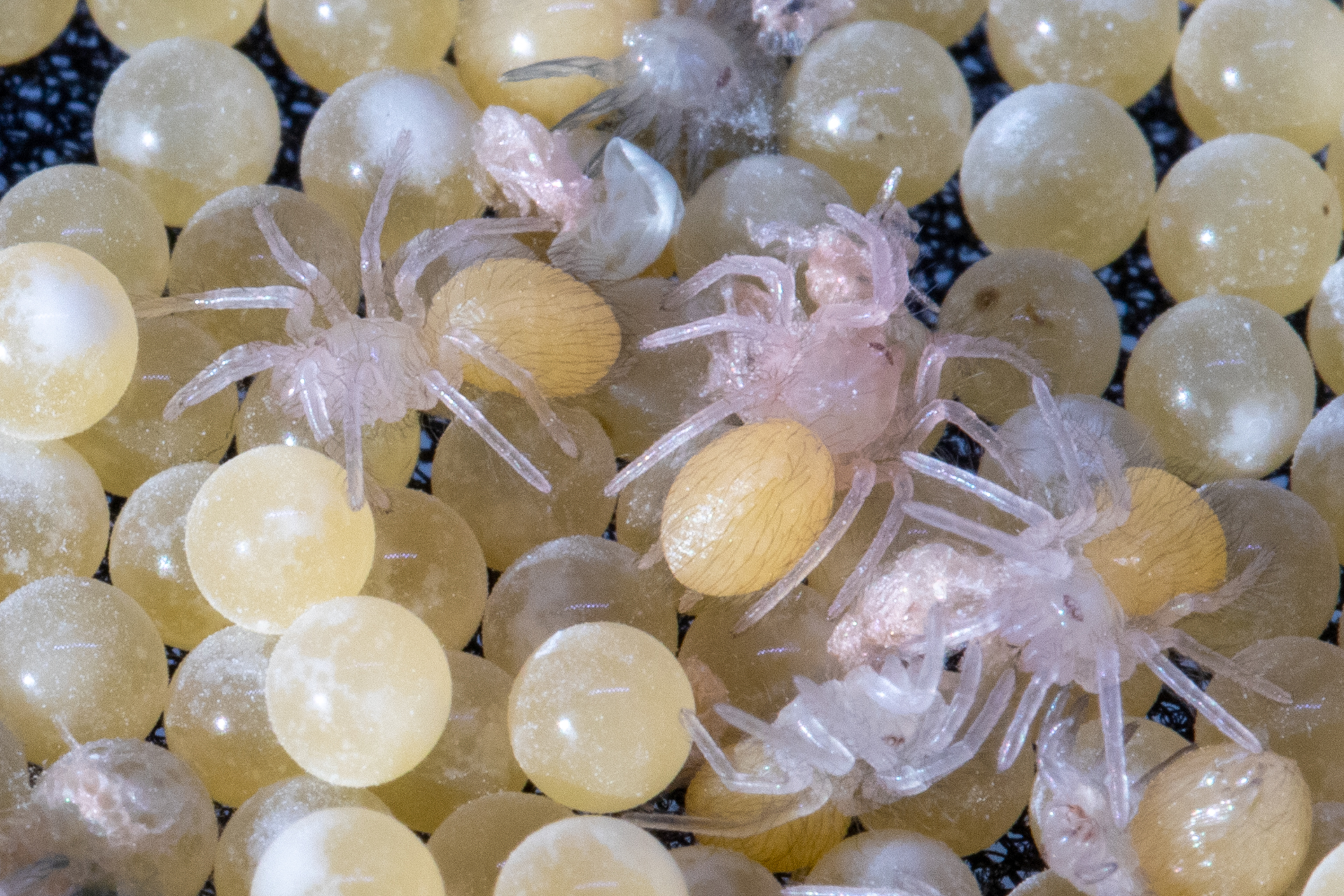 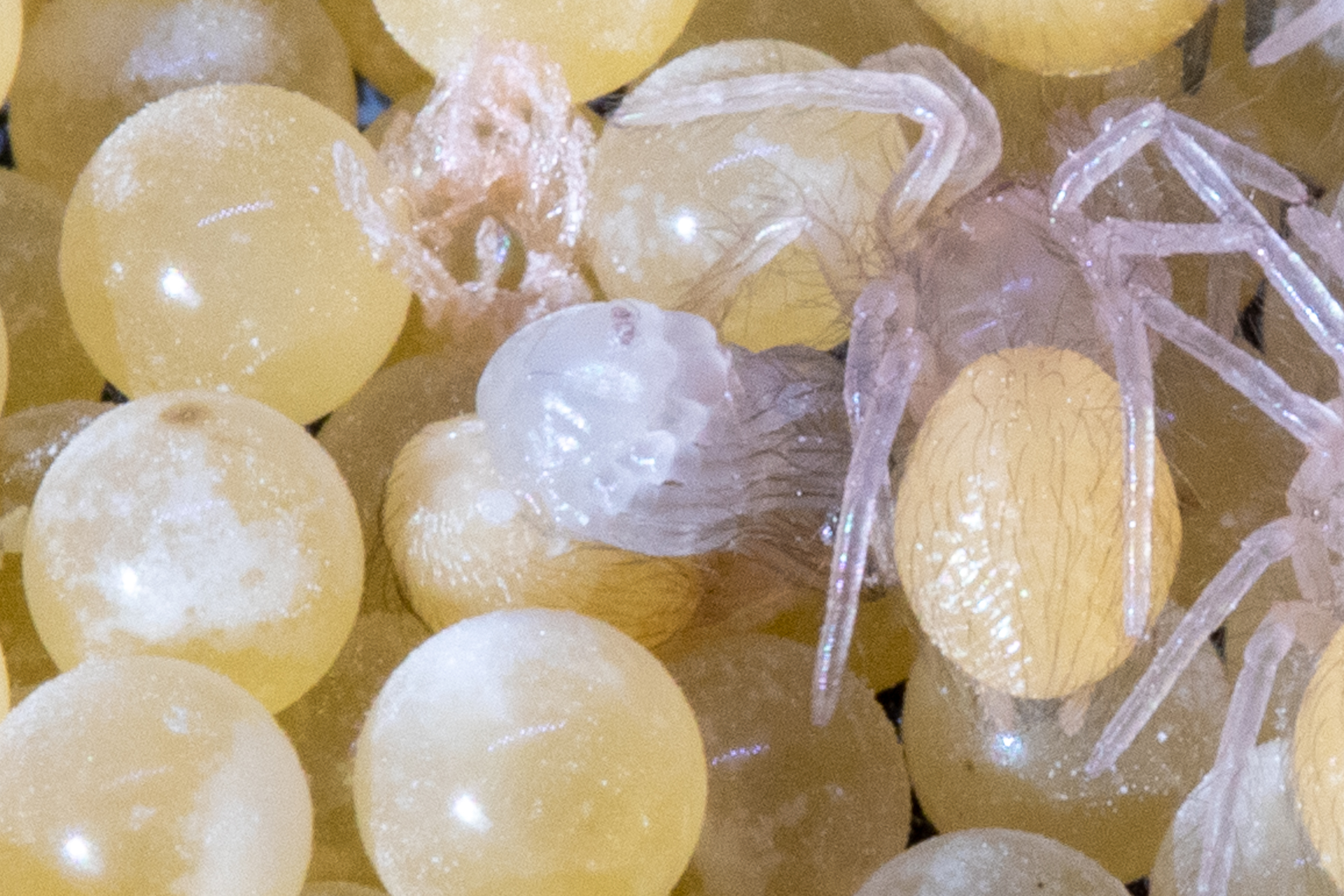 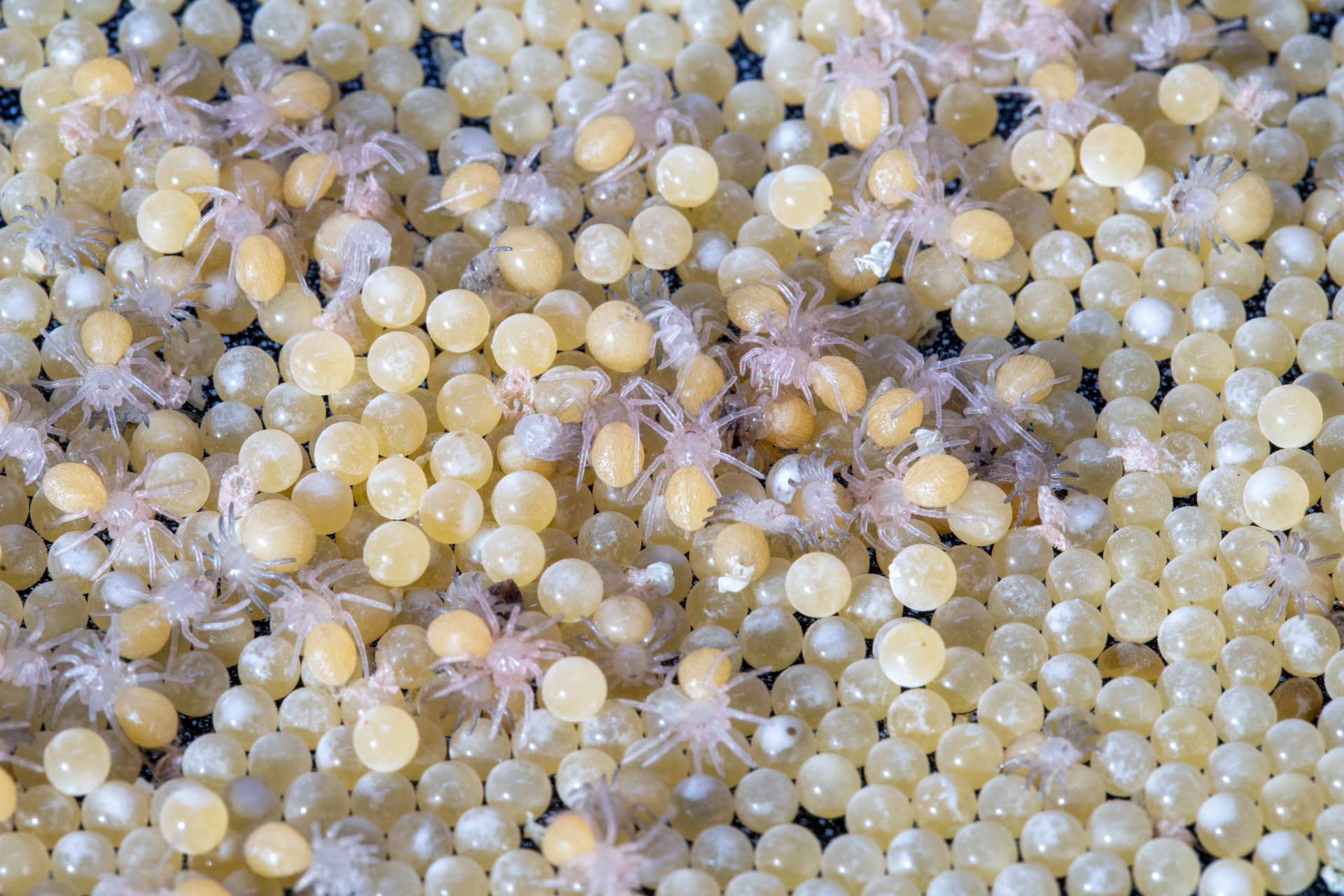 The temperature of the room was between 70 and 75 degrees, which I suspect may be the cause of so many eggs not hatching. About a week ago I added a heatpad to the side of the incubator (a big pvc box with holes, paper towels and then the cup with water and the pantyhose. This has meant that the eggs with legs have now started to moult into their next phase.

Is there a chance the other eggs will still hatch? Was it quite possibly my fault for keeping the temperature too low?

I found the incubator tutorial from Arachno Clown on here and am planning to use this in the future. The large female has now also made a sac which is due to be pulled at the start of april. Now is my chance to get it done properly I would guess.
K

Since I forgot to mention the new temps, with the heating pad to the side and can't find an edit button: temps are now between between 77 and 85 degrees (we had a stormy night and that's when it was 77 degrees, usually when I get up it is at 79-80).

I can't get the temperature higher than what I have now without putting the heatpad underneath the actual box and that then results in condensation on the side of the box. Humidty is currently at between 75 and 85%.

1,000+ Post Club
3 Year Member
Tarantula Club Member
I heat the entire room. Heat pads are not very reliable, I have never trusted them. If you can't heat a entire room, try heating a cabinet with a quality heater and thermostat. While the mom has the sack you need to be hitting at least 82 degrees also.
I also use a probe gauge with the mom to check the humidity while she has the sack. This is very important. If the humidity isn't right they won't develop. Your problem may have been at the beginning and not so much at the end.
K

I don't actually have a separate tarantula room, it's where my desk is and where I spend most of my time. It's not feasible to heat this room to 82-85 degrees (for myself and for my electricity bill). I do remember using the heating pad last time around (10 years) and then having 500+ slings come to fruition.

As of today I have removed all unhatched eggs. I am certain that, if you look at what stage the spiderlings are at, those wouldn't hatch anymore. I believe I am now awaiting the next stage at which point they will start feeding. Some 1,000 sling pots are on the way to be delivered so I can separate them when they moult. 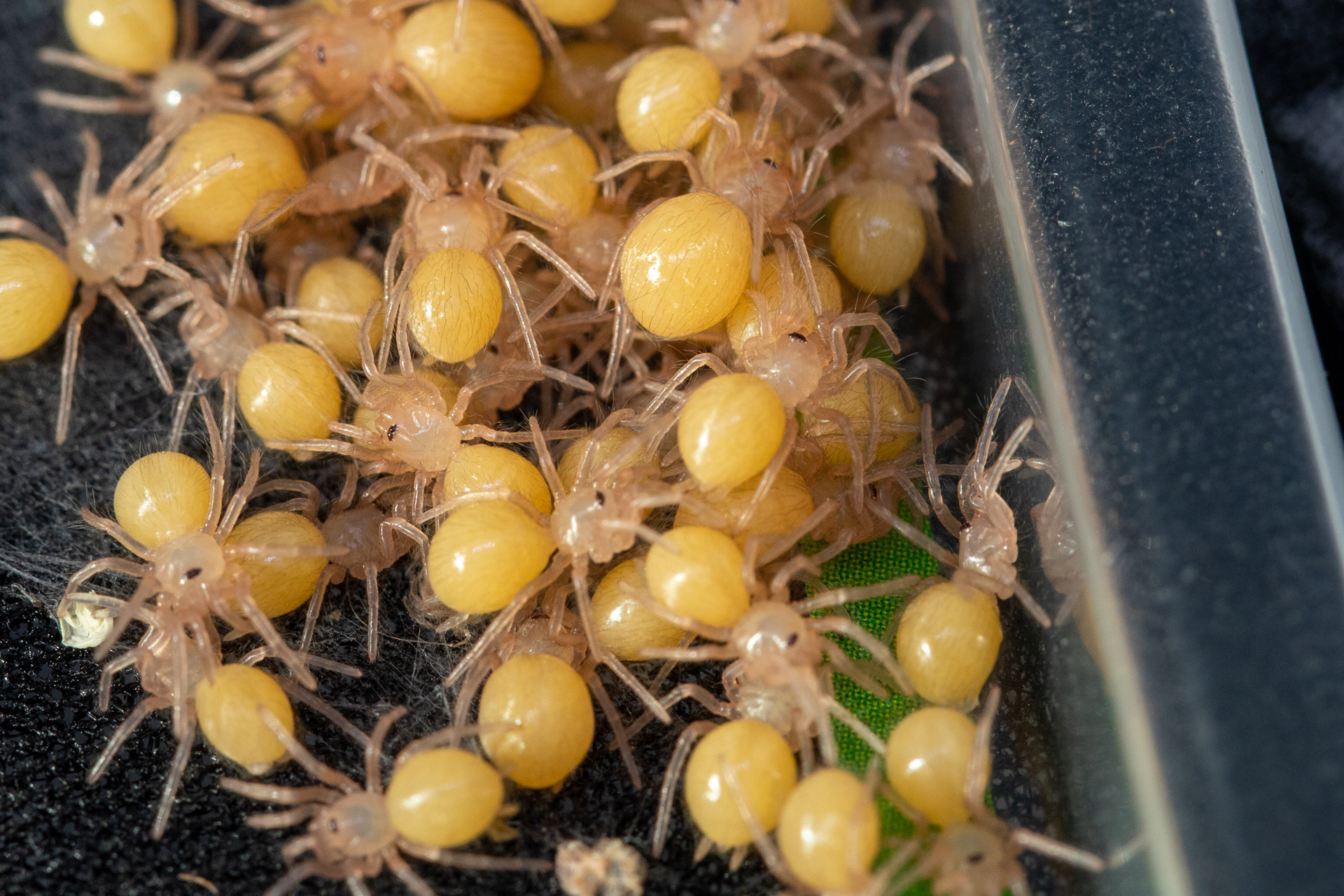 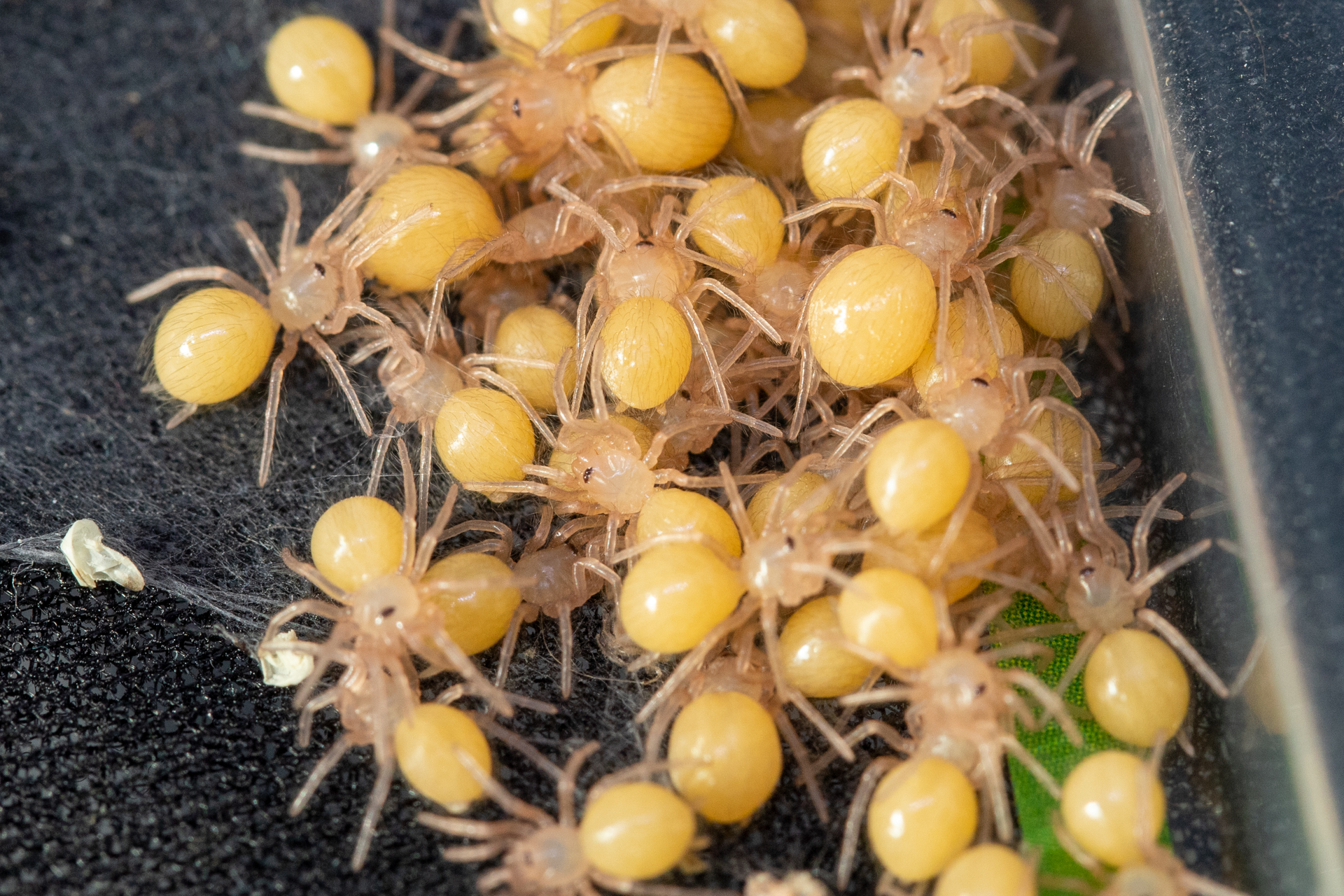 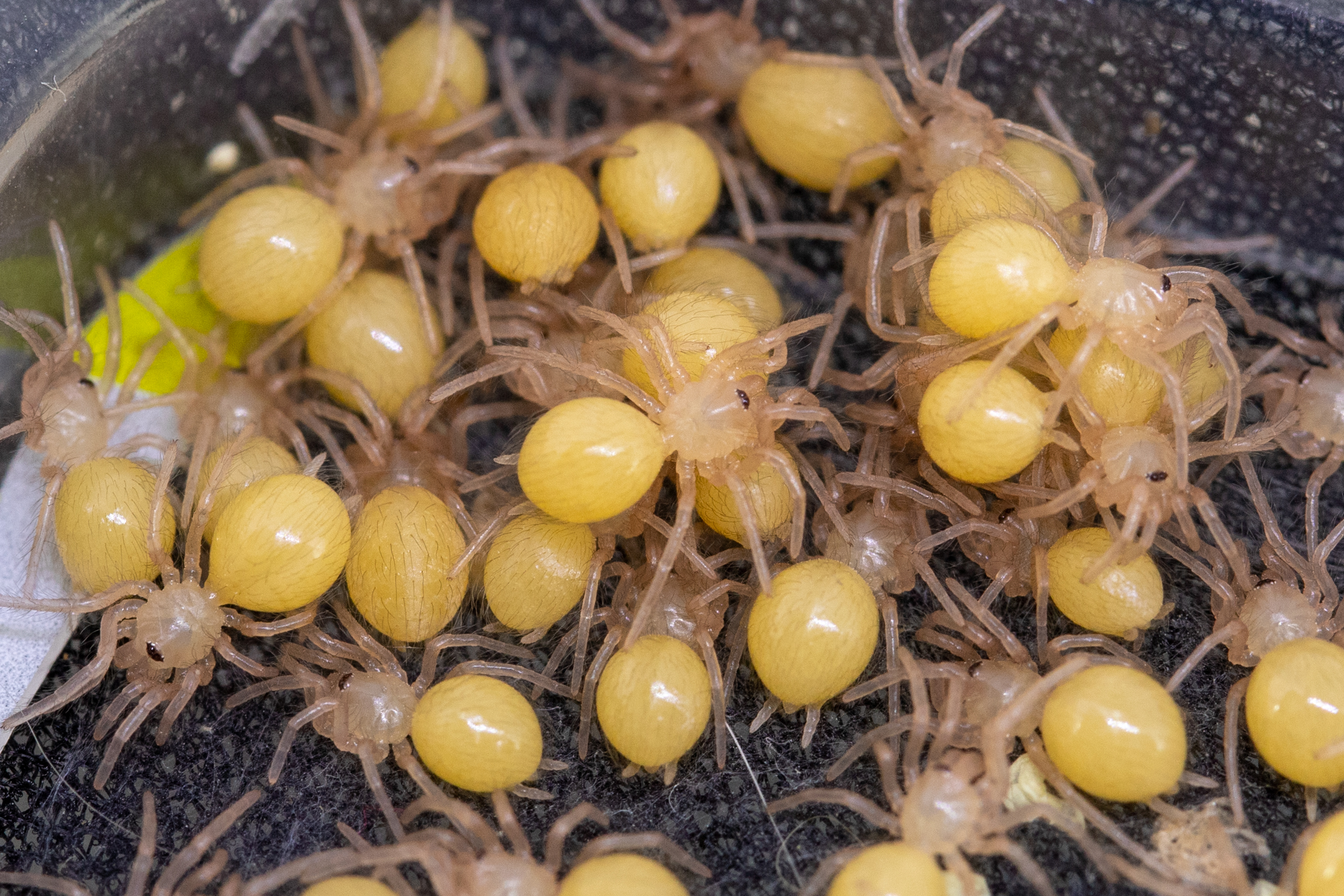 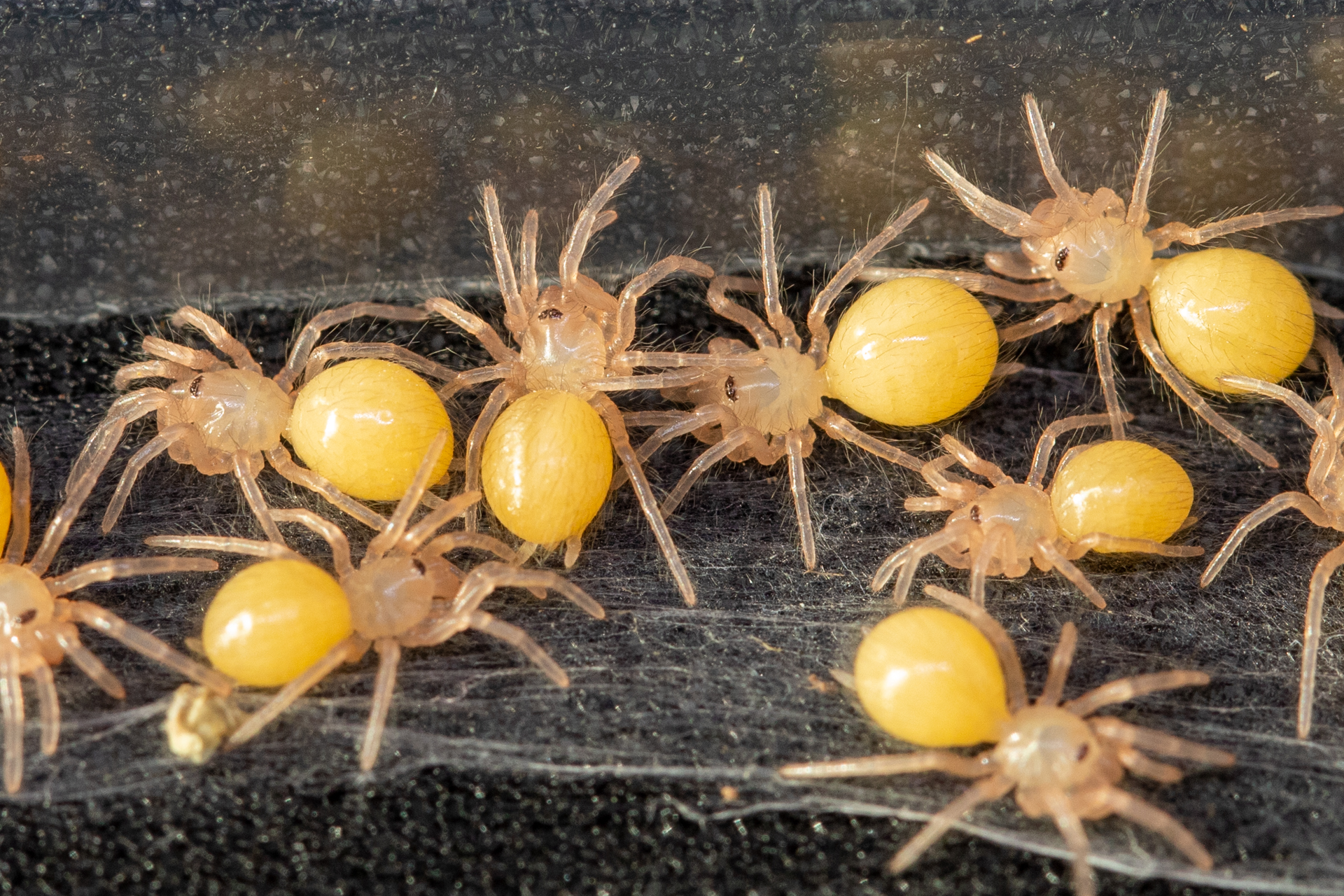 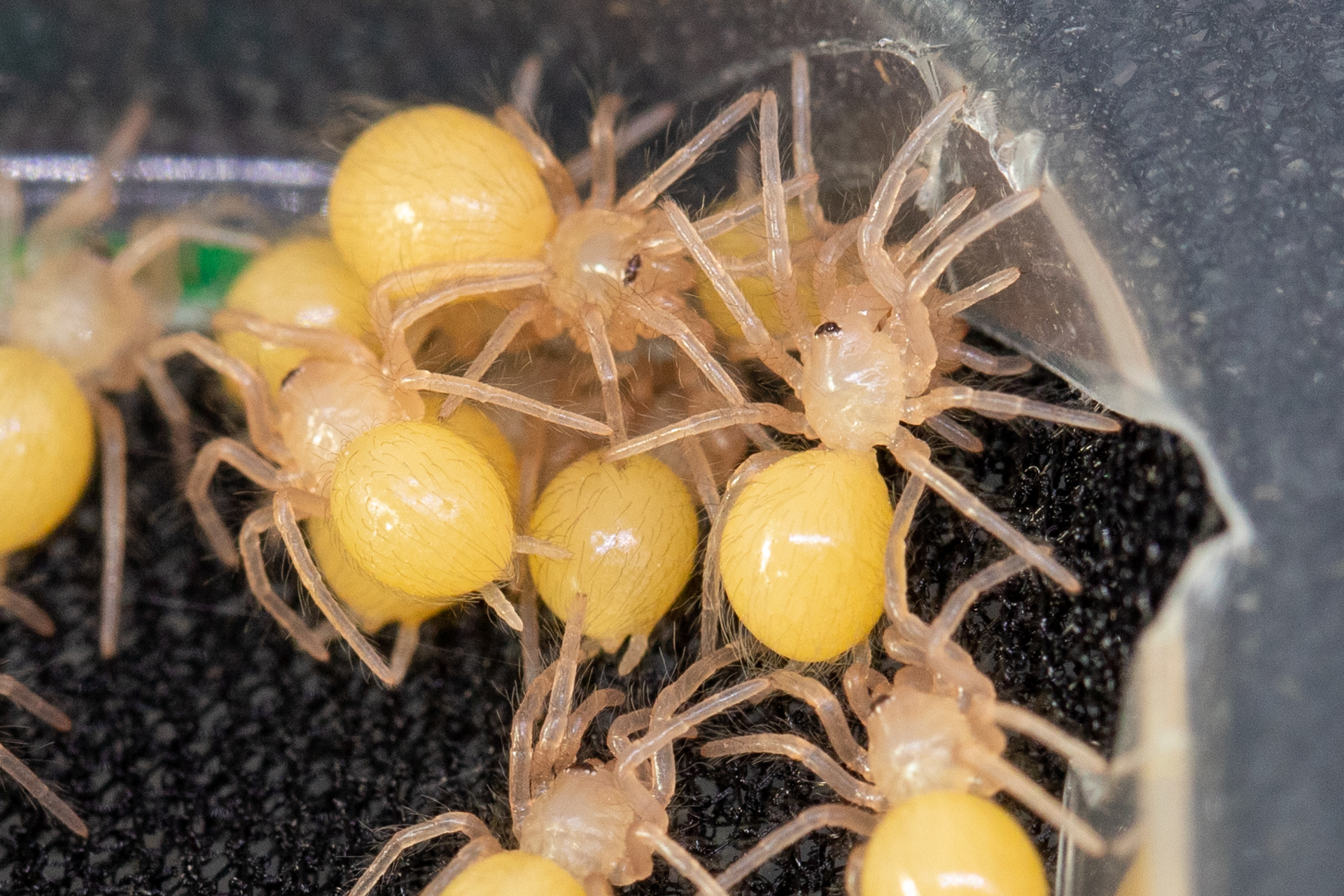 The small ones are now being kept at 80 degrees with a humidity of 80%.

The other female with the egg sac is being kept between 83 and 86 degrees with humidity between 70 and 80%. I've put a thermometer/humidity sensor in the tanks to better monitor everything. Going out on thursday to pick up some extra supplies to make the incubator as seen in Arachno Clown his video for the next sac removal (laid on February 24th and planning on pulling April 2nd).

I think/hope I can risk waiting until day 38 to pull the sac.
K

And one cropped photo which gives us a more detailed look even: 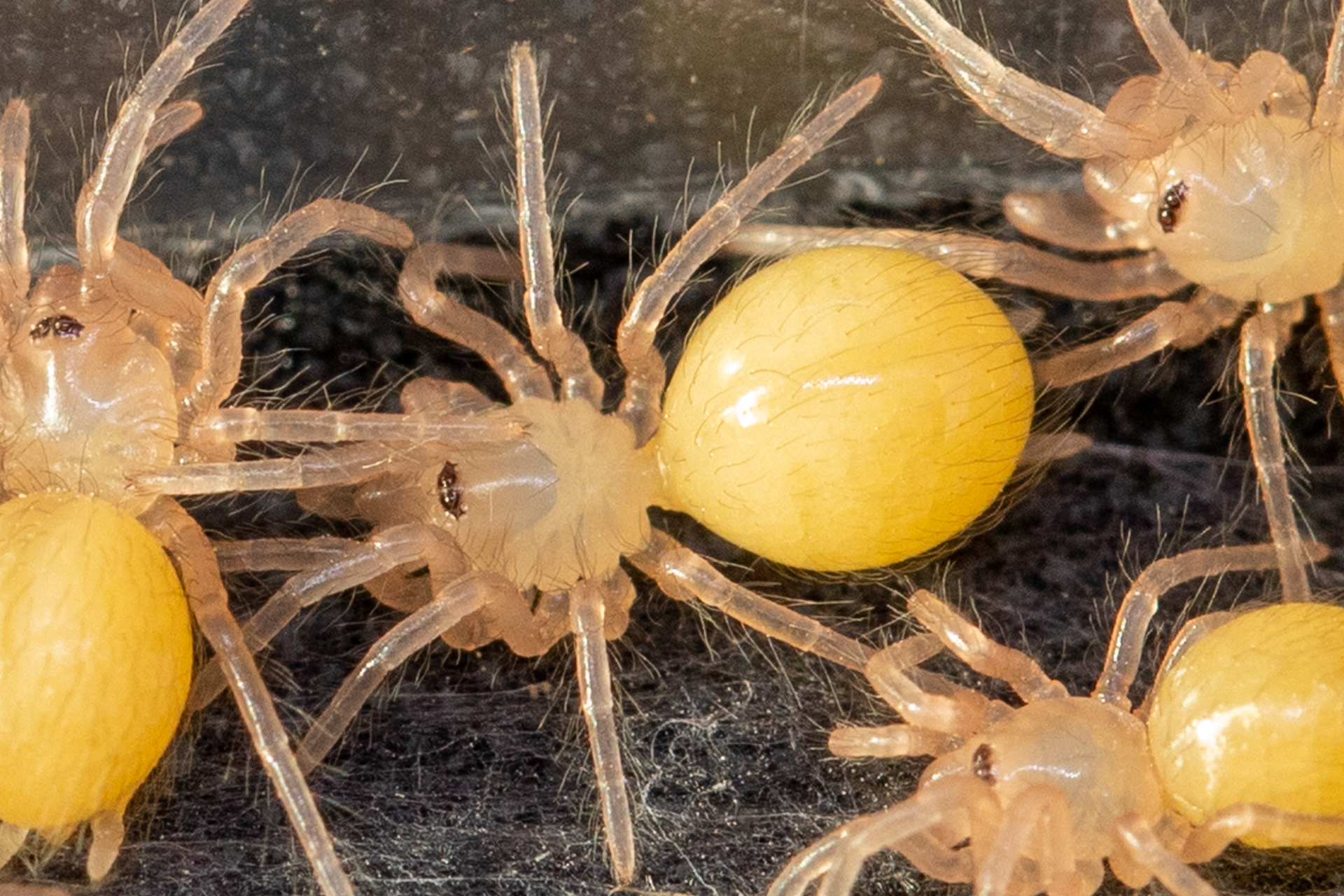 Pulled the second sac today. It was a very short, but fierce battle with the mom during which he used fangs to hold on to the sac. Some of the eggs were damaged (but lots remained!).

Here's the end result with the eggs with legs on the right side of the image. Image quality isn't up to par since I used my smartphone this time. 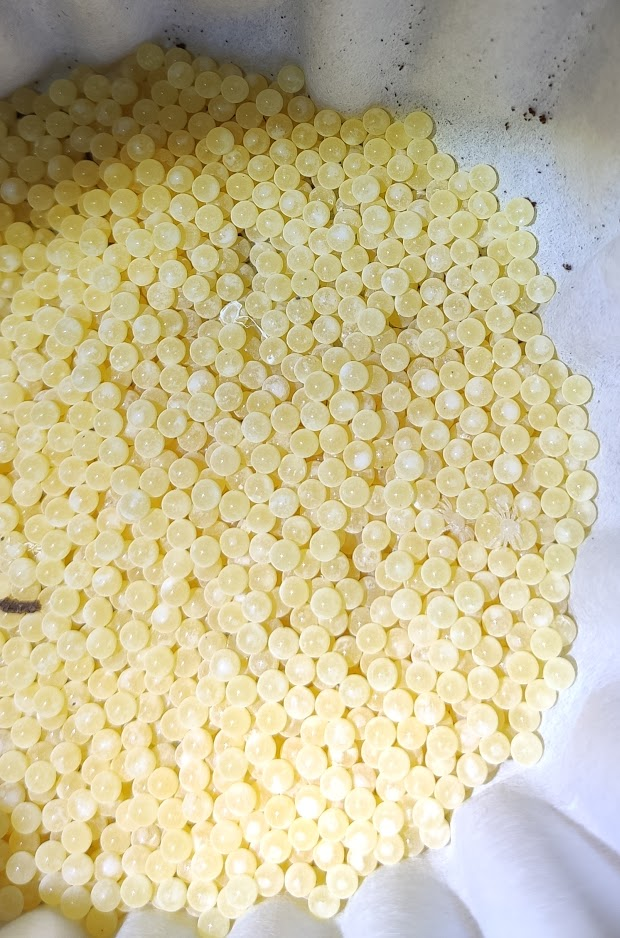 Also, incubator is courtesy of Arachno Clown. Thanks for the informative tutorial!

PS: is there any way to edit a post?
K

Very small update. The eggs are still doing fine. The two eggs with legs have molted out, while the other eggs are still just eggs. Wondering if anything is going to come of it if these two are already this far along. Might something have gone wrong after all? Perhaps the male his sperm wasn't perfect or the conditions weren't right...

There is a heat source on the side of the tank and the temps and humidity are being monitored.

1,000+ Post Club
3 Year Member
Tarantula Club Member
I'm feeling like the heat source is too close. I have yet to talk to another breeder that heats a enclosure rather then the room or breeding cabinet. If you think about it where can she retreat if it gets too warm for the sack? Spikes of temperatures can cause lost humidity also. Your eggs look terribly dry.
You must log in or register to reply here.
Share:
Reddit Pinterest Tumblr WhatsApp Email Share Link