1,000+ Post Club
After reading about these beetles (Dermestes maculatus) I decided I'd keep the ones I find in the cricket tubs, but of course there have been none in the last few tubs I bought so I still only have two beetles and one larvae, although the larvae should pupate soon if it hasn't done so already. Interestingly the other day I could see movement beneath the substrate and both beetles were above the disturbance which had to be the larvae because nothing else was added to the tub, I hope they weren't trying to eat it. I hadn't read that they would, and there was a centimetre of substrate between the disturbance and the beetles, but I had read that commonly a piece of foam is added for the larvae to pupate in. I hadn't added one because it is a large tub for 2 tiny beetles and 1 larvae.
Initially I added a chunk out of a tin of "gourmet" dog food that I feed the lizards (as part of a varied, rounded diet) and they all took to that within minutes. I have since added two pieces of semi dried raw chicken which they liked, I saw behaviour from the beetles like headstanding and posturing on top of the chicken so I hope they might lay eggs on it if I am lucky enough to have a pair.
I assume I will soon collect more larvae and beetles as they are usually quite common in the cricket tubs, but I really only need one to lay fertile eggs and the colony will grow.
In the pictures you'll see that following advice from taxidermy sites I spray the meat and around the water dish but keep the rest of the substrate dry.
If you keep these or have experience with them let me know, post pics if you can, I'd welcome any input. 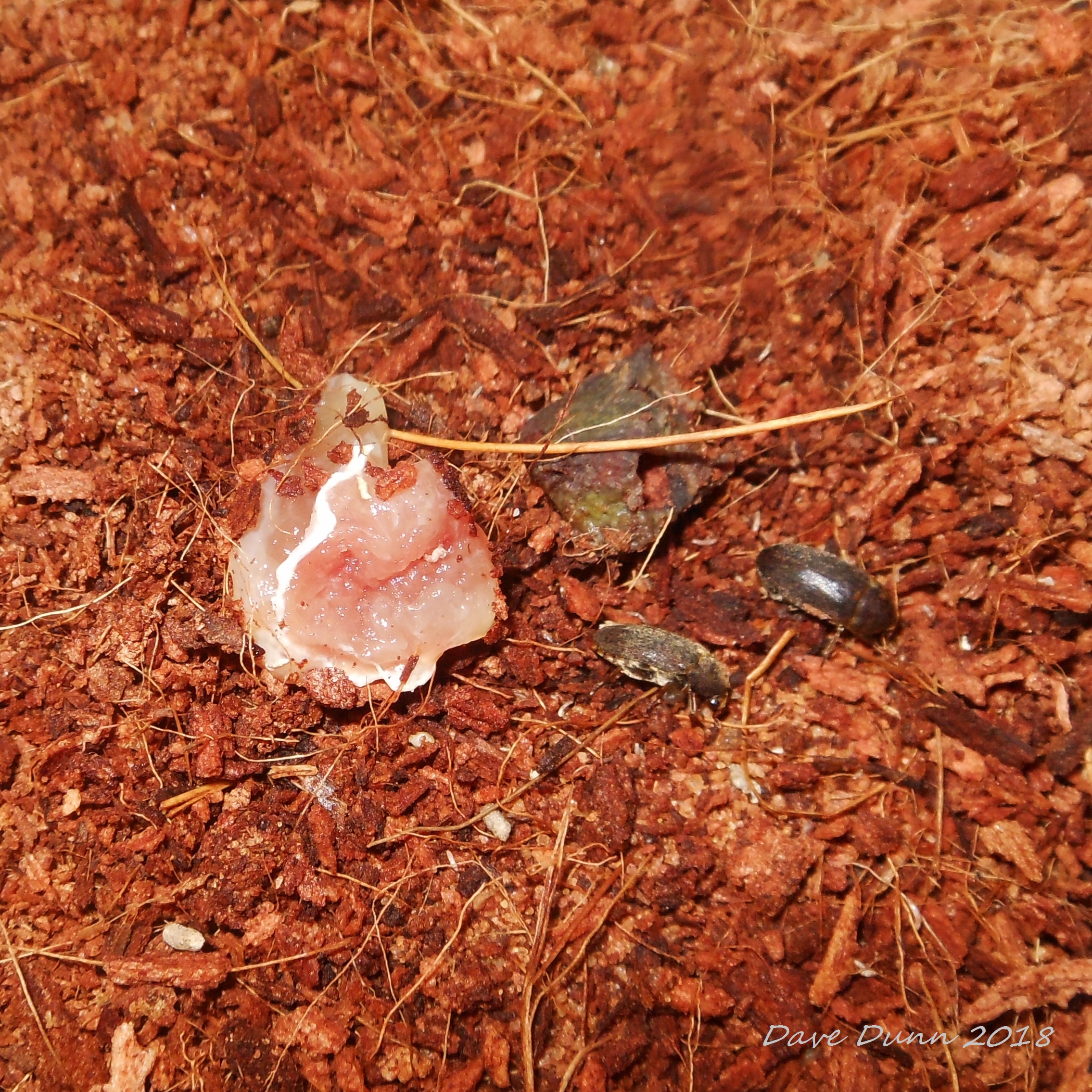 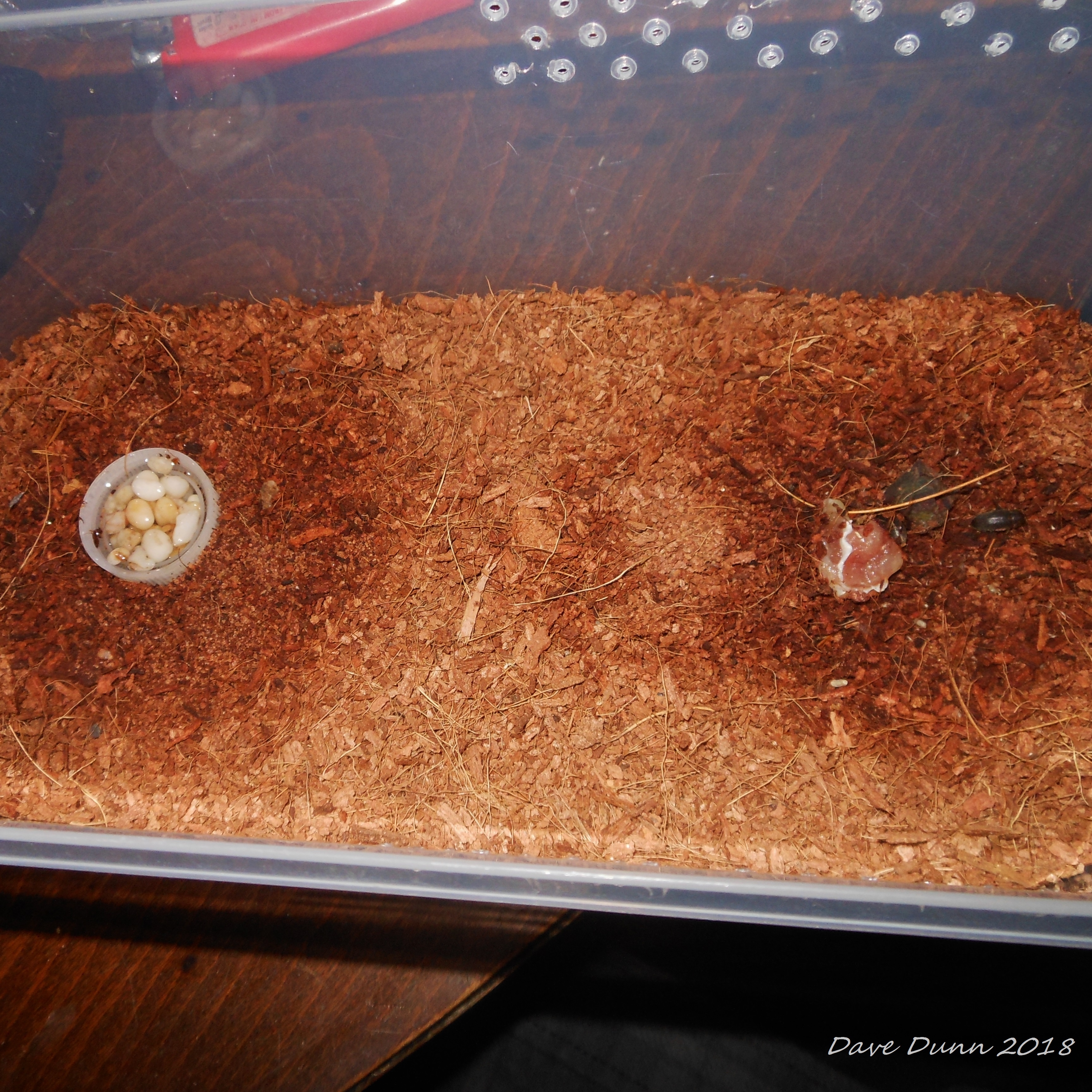 I had a larvae, named him Henry, put him in a little bottle with an inch of substrate to see if he’d go through metamorphosis, well the little bugger managed to chew through the thin plastic lid. I don’t know how he got to it, or how he chewed through, but he did. Haven’t seen the little guy since, though I found an exo skeleton on the shelf he was on.

1,000+ Post Club
I have these living symbiotically in my roach bins. Not sure where they originally came from, but its fun when I pop the top to show someone the roach colony and a dermestid beetle fly right up at their face. They usually react with horror and revulsion, and I get tremendous enjoyment from watching their confusion when I matter-of-factly proclaim: "Oh, that's not a roach. Its a dermestid beetle." They stop the revolted expression, but they aren't sure how to feel about a beetle launching at their face. I just watch those wheels turning in their head…

I don't feed my beetles or their larva and I don't have any substrate. They live in the frass at the bottom and feast on the dead roaches. Their fuzzy little larva are kinda cute.

1,000+ Post Club
I took more pictures the other night, there are now at least 20, could be 30 or more, the substrate is constantly churning at the feeding end which is also the end closest to the heater, or perhaps I should say furthest from the wall as they are not really near the heater at all but they must feel the difference.
I love the reaction I get calling them Flesh Eating Beetles, it's definitely the most dramatic common name!
You must log in or register to reply here.
Share:
Reddit Pinterest Tumblr WhatsApp Email Link