I got my first tarantula today, a juvenile curly hair She is settling in in the cupboard; I am leaving her alone for a good few days. However the crickets are causing chaos.

I'd ordered two bigger plastic containers so that I could have one to unpack the crickets in, but they were out of stock so rang me and arranged to send a cricket pen instead. Which you would have thought would be more appropriate but nope! It's so small that loads of crickets escaped when I tried to transfer them, am very glad I did it in the bath! They are still in the bath, as I don't trust them to stay in there, and sure enough a few hours later 5 escaped. I have pushed cardboard into some cracks where I think they may be getting through - since then only one has got out. However that has also meant moving the black tubes up.

I am pretty sure none have got further than the bath, however my first question is what happens if one escapes from the house? :/ On the box it says 'not native to the UK, do not release into the wild.' I had thought maybe that's because they will die but... are there other dangers?

I am concerned about the cricket welfare though as well; I feel like the cricket pen is too small for them to move around freely enough? And have I put in enough food? I filled the dish supplied with Orange slices and lettuce. It says it houses 20 full-sized crickets, however how many small/tiny crickets does that translate to? I have provided photos below for reference.

Also, does anyone have advice on where to get a better cricket pen? I am also confused as to how I am going to change their water and food every day without them escaping too.

Thanks in advance if anyone can help! 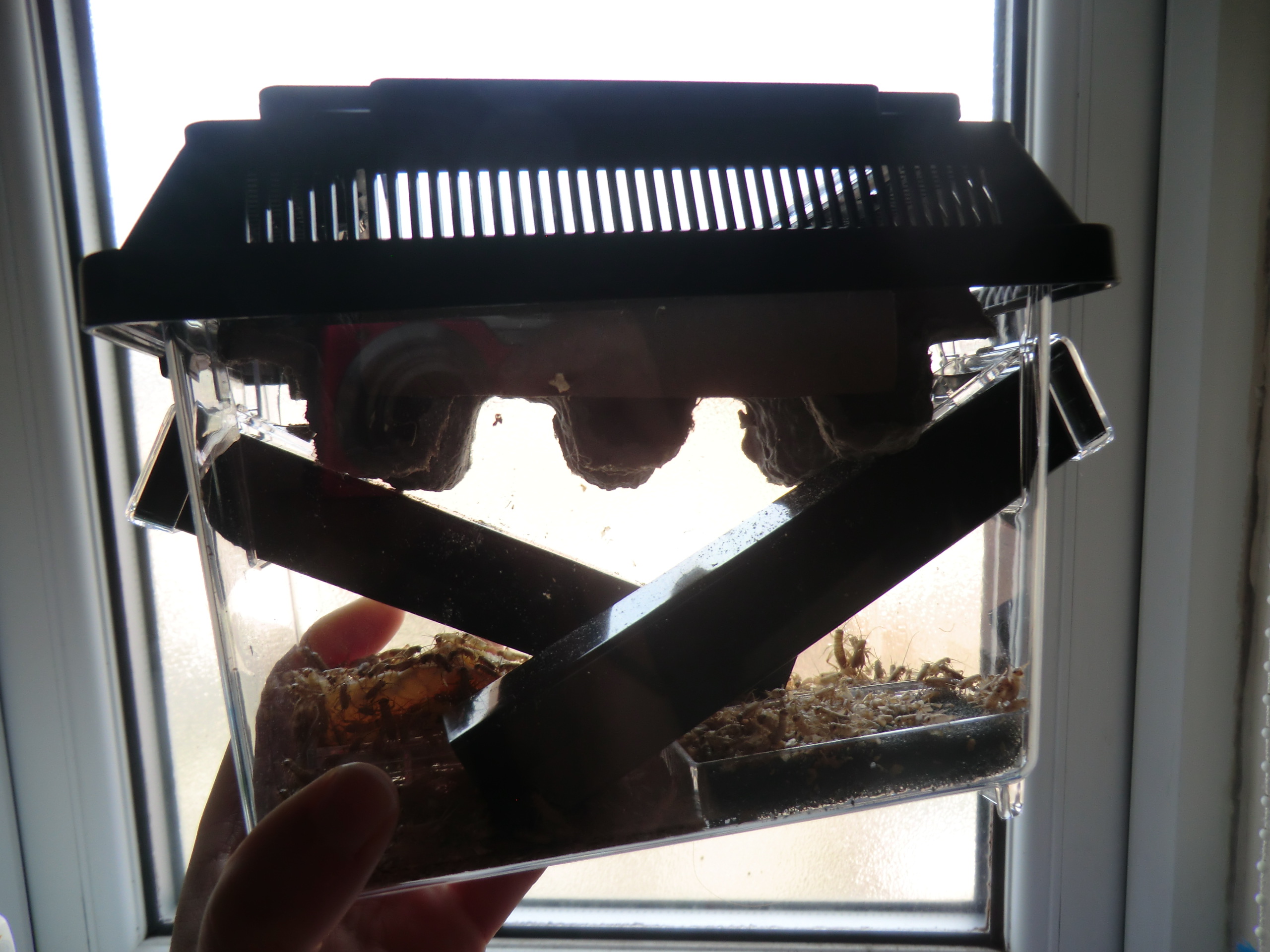 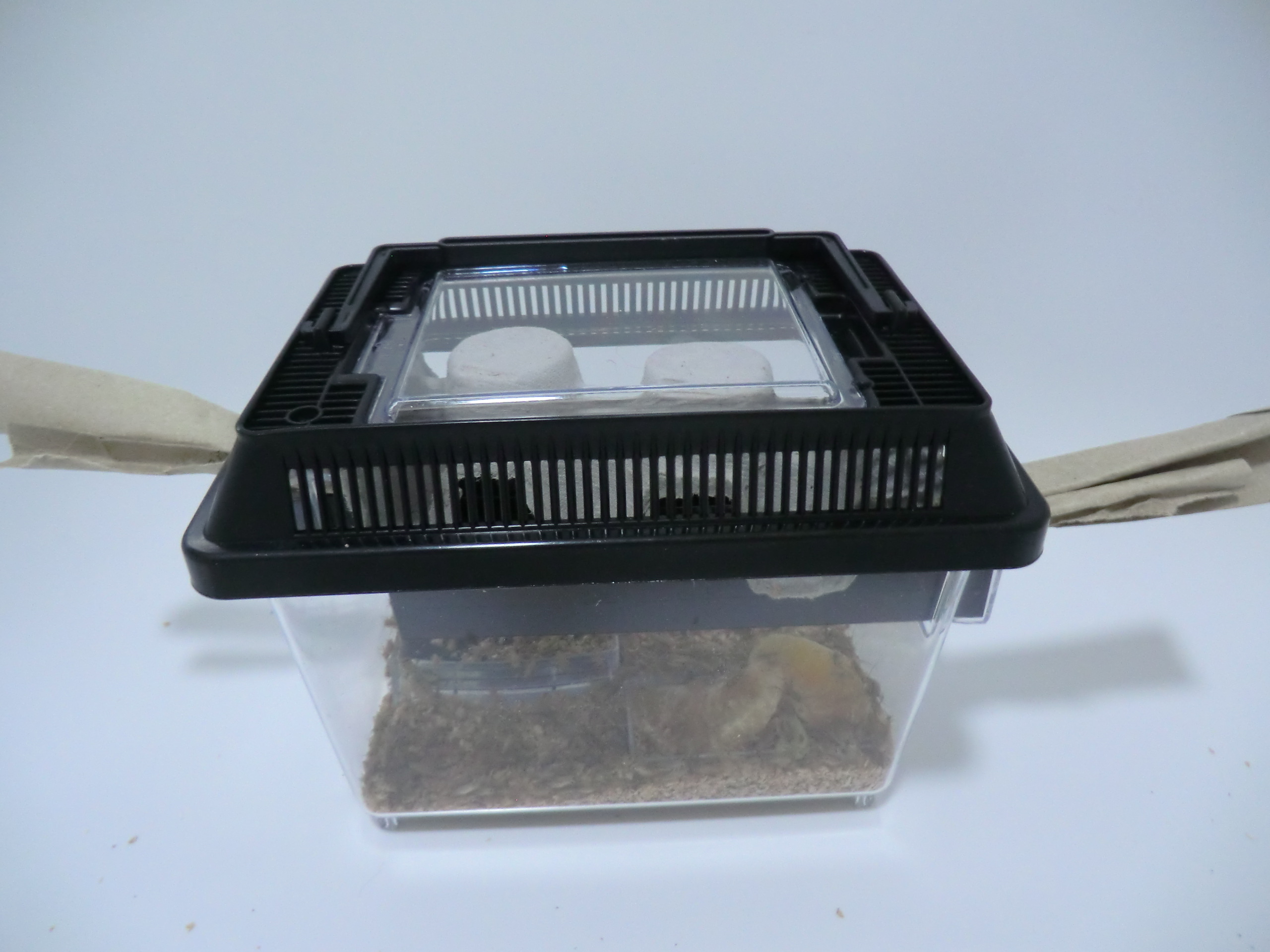 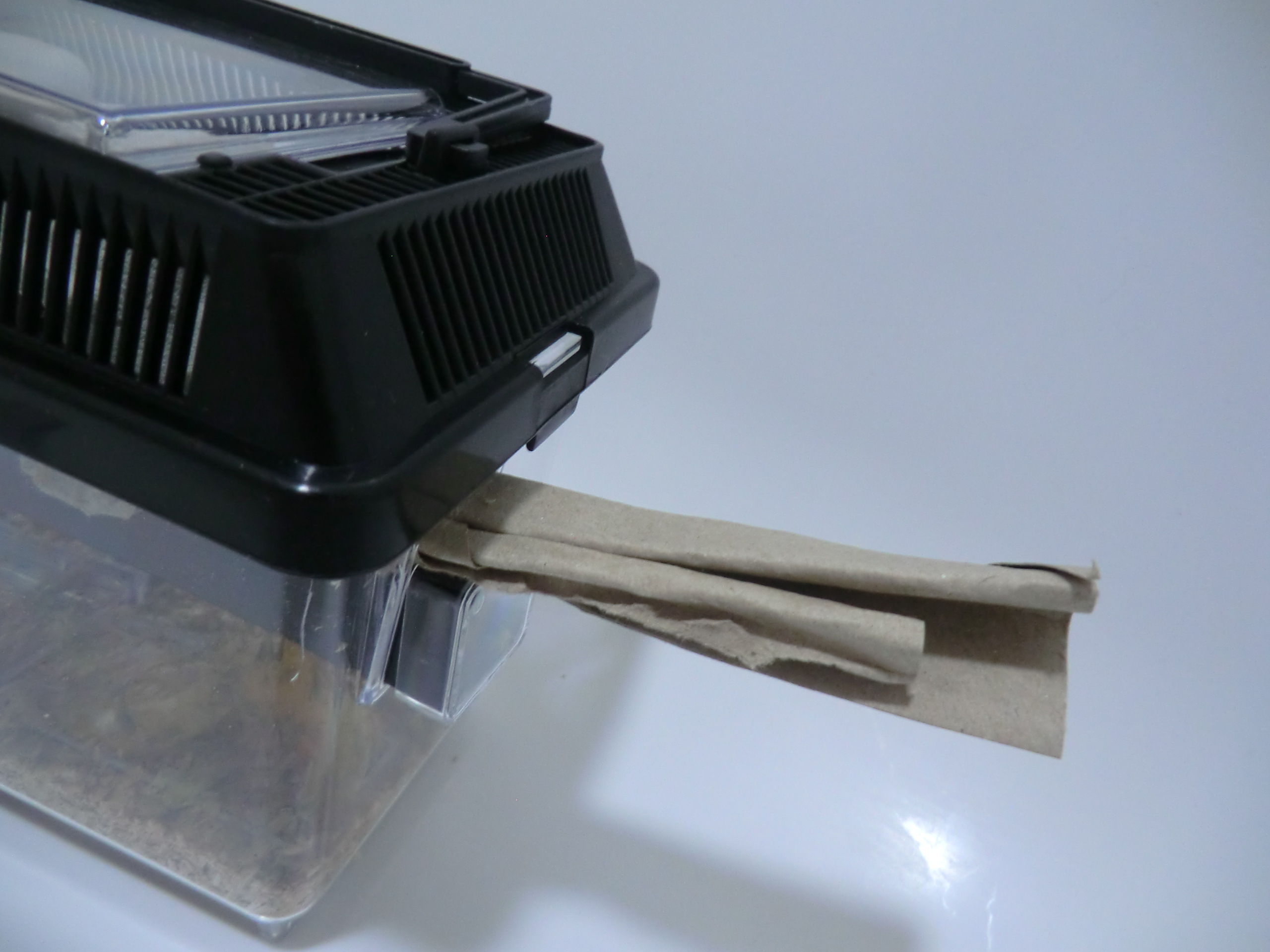 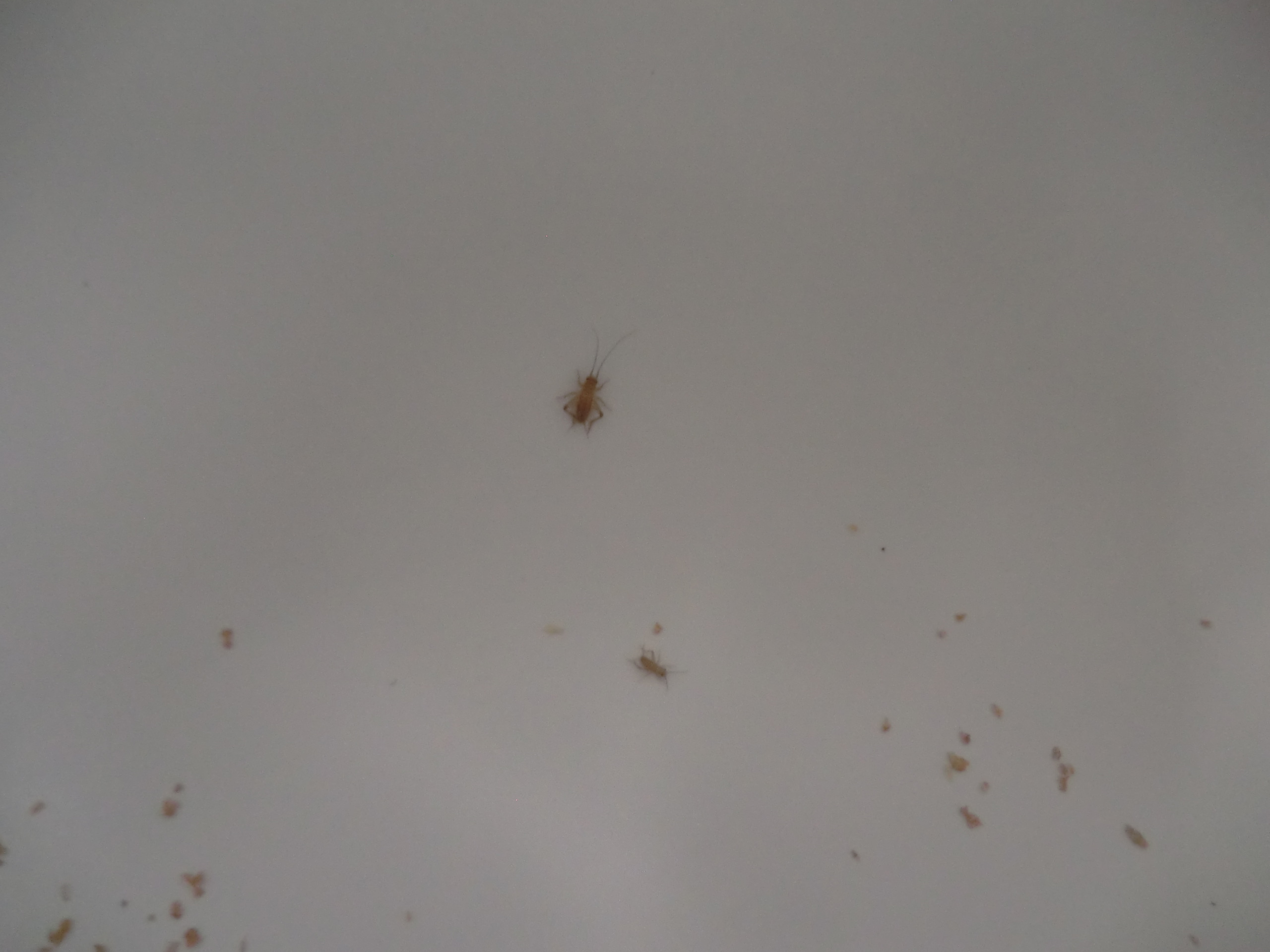 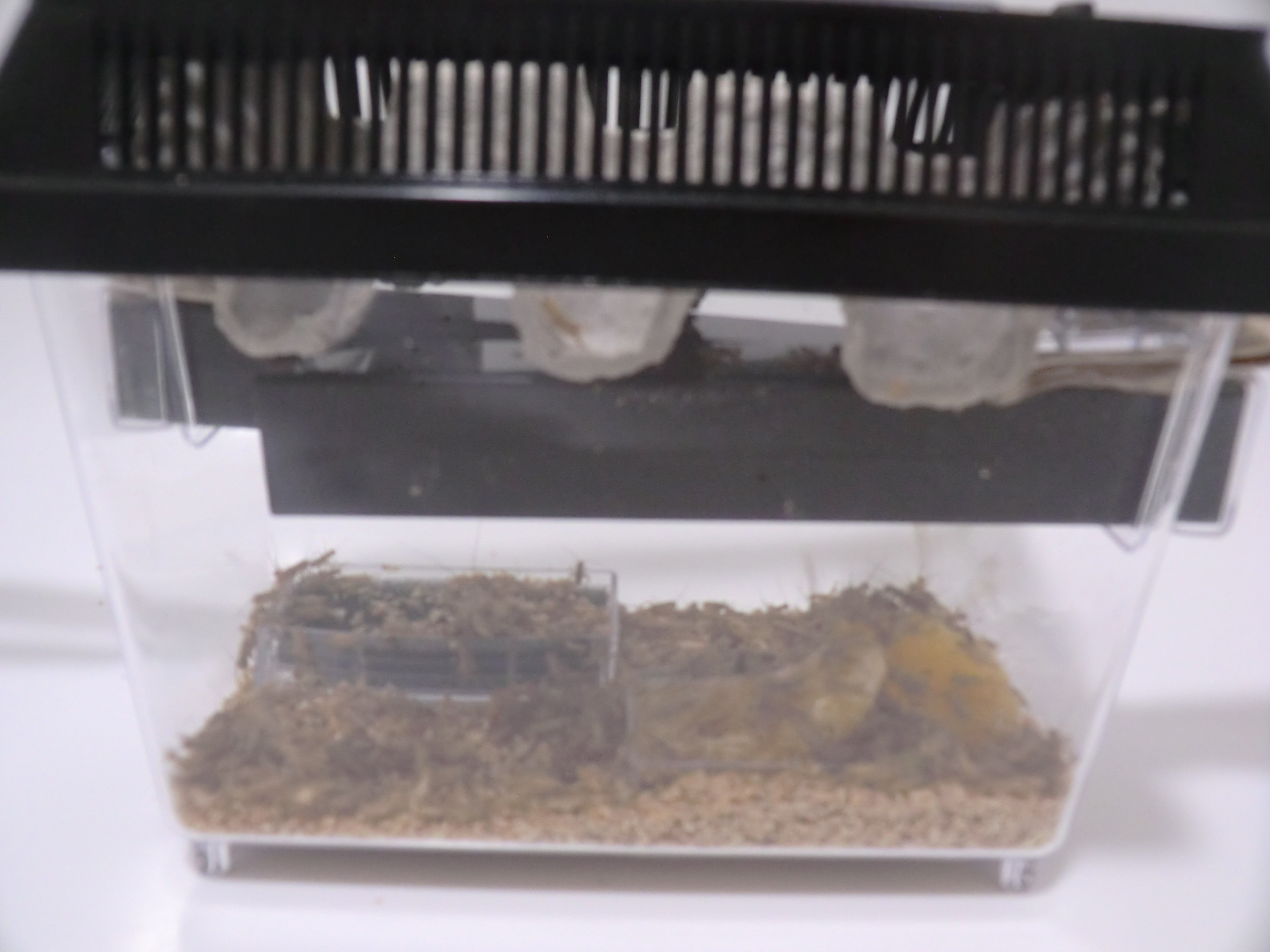 3 Year Member
Wow! You love your crickets! I only buy enough per week to feed my collection, so except for some cricket food, egg crates, and a large deli cup, I don't stress about them. If you keep them much longer you are going to have a lot of dead loss. The best cricket pens will only give you about 3 weeks of cricket life. Finally, if they escape they will die within days. You don't have to worry about the cricket apocalypse in Great Britain. Hope this helps. Good luck with your T. Albipilosum. Good first choice! Cheers

Great addition, crickets are a**holes. Follow Wolspiders advice only buy small quantities. They will die, so it's a waste. Gut load with fruits and veg. How big is your T.? You should feed maybe once to twice a week.
R

Water crystal additive for water. They will drown themselves in standing water.I bought 6 A3 size which is just over pinhead size. I found 3 dead within 24 hours. Floaters in the little water dish. You add these crystal's to water and it makes it into gelatin. They can get hydrated from that. You cannot give it to your spider. I hope that helps a bit.
G

Thanks for the replies and reassurance that there won't be a cricket apocalypse here!

Misty (I have called her) (T. Albipilosum) is still pretty small (5-6cm), so yeah she won't need many at all before they die :/

I tried to get the smallest pack of crickets I could from the spider shop, haha. Due to travel issues I can't get crickets in every week, I rely from getting them online. My plan was to try her on these then maybe get some dubia roaches to breed.
R

Do they have Lat. Roaches available(Red Runners)? They dont climb and jump. You can get them small to adult. No noise, but gut load super quick. They will also run around without borrowing in the substrate.
G

Redsycthe said:
Do they have Lat. Roaches available(Red Runners)? They dont climb and jump. You can get them small to adult. No noise, but gut load super quick. They will also run around without borrowing in the substrate.
Click to expand...

I will have a look, thanks a lot!
R

No problemo. Enjoy Misty, your going to love the little fuzz butt.

Tarantula Club Member
I did think about buying one of those cricket pens, but thankfully I did some research first. They are well known for not keeping crickets contained. Personally I keep the crickets in the containers they come in. I just pop a couple of slices of potato in for moisture & some extra cheap porridge in. I do lose a few, but I personally go through a tub so quickly, that I normally loose very few.

1,000+ Post Club
With only the one T I wouldnt bother with crickets.. They will die off before you even use half... Get a tub of mealworms and keep them in a cool place they will last for ages and you will have a lot less waste

1,000+ Post Club
3 Year Member
Tarantula Club Member
Crickets are arseholes for sure. I buy them by the dozen and feed them out within a few days as an alternative to roaches - for variety.
You must log in or register to reply here.
Share:
Reddit Pinterest Tumblr WhatsApp Email Link