Best thing to do for this poor roach? :(

One of my pet hissing roaches got stuck in his moult last night It took me one and a half hours to get most of the moult off using a pipette for water, cotton swab and scissors to cut anything that was definitely not attached to the fresh body. Where there was white goo I put corn starch on in the hope of clotting the bleeding, like I heard you should do for tarantulas, but I'm not sure if roach 'blood' is the same? He is still alive (see video), and the legs are much more free than they were originally; he seems to be trying to clean them. However it looks unlikely he'll ever be able to walk The legs are so mangled and parts are nearly completely severed but I don't know if it's possible to amputate without causing him to die in an even more painful way? He hissed when I attempted to put him upright, so I have stopped doing that, I assume the hiss is discomfort but at least the hiss is intact.

For now I am continuing to put water droplets on him every now and again which he seems to be drinking/helping him to try to clean the legs. He is also in a separate enclosure on his own now. 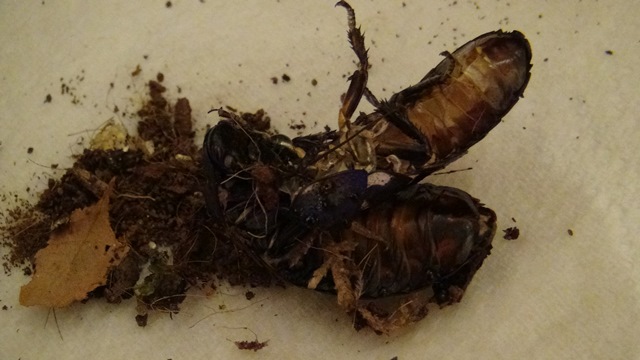 Feed him to your favorite T bud. Circle of life.

Honestly, it looks like he's had it. If you don't like the idea of throwing him to a spider, put him in the freezer, let him drift off that way.

Thanks for the replies, I'm not sure if any of my Ts that are big enough are hungry as they've been refusing food for months/possibly in pre-moult but will see.
You must log in or register to reply here.