A Beginner's Guide to Choosing a Tarantula Companion

Article Gallery
While the idea of keeping a large, hairy, often times ferocious looking arachnid might seem a daunting and non-appealing task to some people, the hobby of tarantula keeping can be an inexpensive and invaluable opportunity for people of all ages to learn to care for an exotic creature. By expanding basic knowledge of tarantulas, more people can come together in appreciating their many amazing qualities often overlooked by those who are not informed about the beautiful, often docile, insect eating spider. With a little information on the different types of tarantula as well as instructions on basic care and habitat maintenance, the mystery can be taken out of the process of owning a tarantula, and you may find that you, too, may want to participate in this exciting hobby. This article will discuss the difference between Old and New World tarantula species, basic care and maintenance of your spider and its habitat, how to pick the correct age of spider, and finally some examples superb beginner breeds. 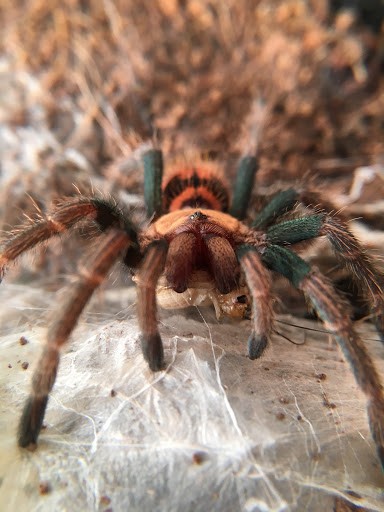 While contemplating entering the world of spider keeping, it is important to consider the two major classifications of tarantula, Old World and New World. The Old World variety of tarantulas reside solely in the eastern hemisphere, including species from Australia, Africa, much of Asia, European countries on the Spanish Peninsula Turkey and Italy. The New World tarantulas, whose name is derived from that given to the Americas by early explorers, can be found throughout the SouthWestern United States, Mexico, Central America, as well as much of South America.

Prospective pet owners must take into account the important differences in temperament and defense mechanisms displayed by these spiders before pulling the trigger on buying a pet. The typically more docile New World Tarantulas often produce a less severe bite than their Old World counterparts and defend themselves by flinging irritating hairs called “urticating hairs” to repel predators and possible dangers. Old World spiders, on the other hand are far more defensive, and can deliver a highly irritating, possibly serious bite when provoked by an animal or human. Because of the more potent venom as well as the skittishness of the Old World Tarantulas, a beginner spider owner may wish to consider starting with a New World variety.

When caring for your tarantula, you must first be familiar with its basic needs for survival. Because of the tropical habitat of many species of tarantula, it is important to keep your terrarium humid by means of a misting system or manual addition of moisture using a spray bottle or other device. Along with a constant fresh water supply, keep your tarantula in a well insulated, warm part of your home free from extreme changes in temperature. Due to the carnivorous nature of your spider, a balanced diet of insects is recommended, including 1-2 live crickets per week (more if needed), or flightless fruit flies for juvenile spiders, AKA “slings.”As your spider grows, they will experience a periodic shedding of their exoskeleton similar to a snake shedding its skin. Telltale signs your spider may be preparing to molt include temporary refusal of food, appearance of a bald spot or loss of hair, and rolling onto its back before proceeding to the molting process where it will squeeze from its exoskeleton and emerge with a fresh, still soft new outer skeleton. Because of their extreme fragility following molting, postpone feeding for a feeding cycle, and refrain from handling.

When preparing a home for your spider, bigger does not mean better. Spiders often prefer confined spaces where they build their own den in which they can retreat. Provide a clean, moisture-retaining bedding which can include vermiculite, coconut fiber, or peat moss. Be sure to give your tarantula the means to simulate a burrow or cave by including bark, sticks, foliage, or even a store bought hide for spiders. Before preparing your tarantula’s terrarium, research its natural habitat so you can better accommodate its species specific desired environment by incorporating some or all of the above materials. If your spider is known as an arboreal, or tree-dwelling spider, you will want to put more emphasis on tree-like features so your tarantula will feel more at home, as opposed to living in a habitat better suited for terrestrial, surface-dwelling spiders.

For many spider enthusiasts, part of the magic of the hobby is raising a spider from the juvenile stages of life into adulthood and watching them flourish into healthy, happy animals. While highly rewarding, newbie spider caretakers purchasing a spiderling, or “sling”, will have to take extra care to address their more numerous needs. These additional responsibilities will include more frequent feeding, which will be more difficult due to the young spiders poor eyesight; protection from the elements, support during frequent molting, and above all having patience. If you are not interested in waiting for your spider to reach maturity, you may want to start with an adult. These already established tarantulas, who have survived their juvenile phase, will be easier to feed as well as less vulnerable during molting than their younger brethren. Adult spiders for sale may have been captive bred or wild caught, however some people prefer not to support the practice of yanking a wild creature from its natural home. When purchasing an adult tarantula, it is often preferable to choose a female, because of the fact that they live astronomically longer lives that the males. While a female may live a long life of over 20 years, the male of the same species may only live up to a year or so after reaching breeding age, making the female a more desirable long term option.

What Breed Is Right For You?

Before going out and buying the first spider to catch your eye at the pet store or online market, be sure to research some of the different options on the market. If you want a lazy, slow moving non threatening spider, you may consider purchasing a Mexican Red Knee tarantula. On the other hand, if you want a spider that will command attention and be a conversation starter, a great option for experienced spider owners would be the fearsome Orange Baboon tarantula. The following are a small sample of the vast amount of tarantulas you may encounter as well as some basic information.

1.) Pink Toe (Avicularia avicularia) The Pink Toe tarantula is a Central American arboreal spider that is perfectly suited for an owner with some knowledge and experience. Characterized by a dark pink hued body as well as their pink feet, although fast moving Pink Toe can be acquainted with its owner through careful handling, making it an excellent companion over the span of its possible 10 year lifespan (for females).

2.)Mexican Red Rump (Brachypelma vagans) Mexican Red Rump tarantulas, whose name can be explained by its very prominent red colored backside is well known for its steady temperament as well as highly manageable care and maintenance. This Terrestrial species which can reach a diameter of five inches or above including legs often spends time out of its burrow making it an enjoyable option for those who want to be able to spend more time looking at their pet.

3.)Cobalt Blue (Cyriopagopus lividus) The Cobalt Blue tarantula is an Old World Tarantula native to the jungles of SouthEast Asia including Laos, Cambodia, Vietnam, and Thailand. This popular pet spider’s beauty should not distract from its ferociousness. Fast moving and aggressive, the cobalt blue’s bite packs a potent dose of venom making it suited for more seasoned arachnid owners.

Tarantula keeping can be one of the most rewarding hobbies in the pet world. Once involved, you will be exposed to a community of like minded individuals who share the same passion for caring for some of the most misunderstood yet majestic creatures. Be sure to sign up with the Tarantula Forum by visiting https://www.tarantulaforum.com/register/ in order to share your experiences and engage in discussion on all things spider.
Reactions: octanejunkie and Sonicookie

If you are the sort that keeps all of your plants watered flawlessly, maybe even a Pamphobetous species large sling or small juvenile might work.

Large slings or small juveniles 1.5" to 2.5" DLS are probably best. They are large enough to be hardy but small enough not to intimidate a new owner so they can grow with the tarantula.

Whitelightning777 said:
I think that there's a decent middle ground between a Brachyopelma and a Cobalt blue (or OBT)

If you are the sort that keeps all of your plants watered flawlessly, maybe even a Pamphobetous species large sling or small juvenile might work.

Large slings or small juveniles 1.5" to 2.5" DLS are probably best. They are large enough to be hardy but small enough not to intimidate a new owner so they can grow with the tarantula.
Click to expand...

The only things I sort of picked up on were I'm not sure a misting system is needed for any tarantula (overflowing the water dish is better than spraying) nor that fruit flies should be the staple feeder for slings as they are less nutritious than pinhead crickets or roaches, small mealworms or even bean weevils. Other members may disagree with me though.
The most sure fire way to piss off any tarantula is misting the cage. It'll generate threat postures from my L klugi or T stirmi 100% of the time and they'll even resort to kicking hairs all over the cage. In the case of my T stirmi, doesn't matter if there screen is never opened, my bedroom and the area around the T becomes virtually uninhabitable for hours.

I have to open the sliding glass doors and some windows to restore sanity to my home when she does that.

For my moisture dependent or species that like a bit of extra humidity (T stirmi & L klugi as well as P sp machala) I simply place some frog moss by the hide or waterdish. Then I POUR not spray water upon the frog moss and sometimes a portion of the substrate. I always set aside an area of the cage, such as on top of the hide or part of one side that I don't spray in case the tarantula feels to soggy or wants dry feet for a while.

A catch cup with holes in the lid is perfect for doing this. The problem with misting isn't the water being added. It's the air blast that goes with it.

If they attack the area being watered, it's just a feeding response. Wait a few hours and feed the tarantula. They aren't actually pissed off, just hungry. It's important to use lukewarm water so you don't shock or burn the tarantula in case it attacks the water as it's being added.

If I had to leave my T stirmi alone for a month or so bring out of town, I might consider adding a misting system, but 99.999% of the time, tarantulas don't need them. Or, at least I've never heard of one that totally needs such a system.

Some reptiles on the other hand, benefit from one, but that's a whole other animal.